Samson Occom was born in New London, Connecticut into the Mohegan tribe. Occom’s youth coincided with  the tail end of the Great Awakening, a revivalist and evangelical movement that stressed the equality of all people in the eyes of God. Moved by hearing evangelical sermons with this message, Occom converted to Christianity at the age of sixteen.

A few years later, his mother asked the Reverend Eleazar Wheelock (1711–1779) to accept Occom as his pupil. Wheelock, an evangelical minister, hoped to spread Christianity among Native Americans by training young Native Americans to serve as missionaries to their own people. In 1754, Wheelock, through teaching Occom, transformed his English school into the Moor’s Indian Charity School in Lebanon, Connecticut. Girls and boys were taught such skills as husbandry and the domestic arts. Boys were also taught Greek, Latin, and Hebrew in order to interpret the Bible themselves. 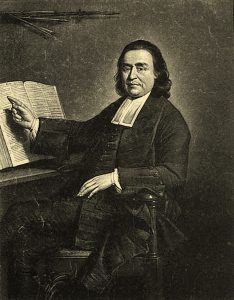 From 1749 to 1764, Occom worked as a missionary for the Montauks at Montauk, Long Island. He taught reading and spread the word of God; for his efforts, he received twenty pounds a year from the London Society for the Propagation of the Gospel, a stipend less than what was given to whites. Occom also married Mary Fowler, who was a Montauk; together they raised a family.

In 1759, Occom was ordained as a Presbyterian minister by the Presbytery of Suffolk. He fulfilled several missions among the Oneida tribe before accompanying the Reverend Nathaniel Whitaker to England to raise money for Moor’s Indian Charity School. Wheelock promised to take care of Occom’s family during his absence. Occom remained in England for two years, successfully raising twelve thousand pounds. He returned home to find his family neglected and the money he raised being used by Wheelock to move the Indian School to Hanover, New Hampshire, where it eventually became Dartmouth College. Wheelock now intended to introduce white missionaries among Native Americans through the groundwork laid by Native American ministers like Occom. Anticipating a diversion of funds and activities away from Native Americans, Occom broke with Wheelock. Occom became an impoverished itinerant preacher among the New England Native Americans. In 1768, he described his ministry and life in a ten-page manuscript that remained unpublished in the Dartmouth archives until 1982. In it, he describes his life as a minister and teacher, particularly his efforts to encourage learning among the young. He also notes his difficulty in straddling the differing cultures of the whites and Native Americans. He assesses his marginalized position as due to the whites always seeing him as an Indian rather than as a Christian preacher. The poor conditions of his life both fulfilled and reflected his being viewed by whites as a poor Indian and a despised creature.

During the American Revolution, Occom encouraged Native Americans to remain neutral. In 1798, he established Brothertown for Christian Indians among the Oneida and served as a minister there for the remainder of his life.