The most common applied chords are : V(7) and viiº(7). The unique quality of these chords (dominant and diminished, respectively) allows them to sound like dominant-function chords even in strange contexts. Example 1 demonstrates this concept: a V7–I progression in one key can be reproduced within a different key. The old I chord, then, is analyzed differently in the new key: for example, as ii, in the bottom staff of Example 1. The old V7 chord is then V7 of ii, written with a slash: V7/ii. The same principle holds with V

and other inverted V chords, as shown in the second row of Example 1.

Example 1. Applied chords are dominant-to-tonic progressions that are inserted into a new key.

If you are asked to write an applied chord, follow this process. We will consider a hypothetical applied chord V7/x. x is a substitute for a Roman numeral—it could be V, vi, ii, or any other major or minor Roman numeral—the process is the same regardless of what x is.

Here is the above process applied to a concrete example: V7/vi in D major.

V7 is not the only possible applied chord—viiº is another common type of applied chord. To spell an applied viiº7, follow a slightly different, but related, process.

As a concrete example, Example 3 demonstrates the spelling of viiº7/vi in B minor.

One exception is that when the tonicized chord is itself a seventh chord—as in the progression D7–G7–C—the secondary leading tone may resolve down by semitone into the seventh of the following chord. In the example progression, this would create a nice chromatic line: F♯—F♮—E (Example 4).

Applied chords are most easily recognized by their accidentals, especially accidentals that raise the pitch—oftentimes, those raised pitches are secondary , applied to the chord. When analyzing the harmonies of a score, you may come to a chord contains raised notes—for example, a chord that looks like ii but is major instead of minor—and suspect that it may be an applied chord. To confirm, skip the chromatic chord and analyze the following chord; then, return to the chromatic chord and see if it is, in fact, an applied chord.

Listen to this excerpt from Elite Syncopations by Scott Joplin while following the score, then answer the following questions. 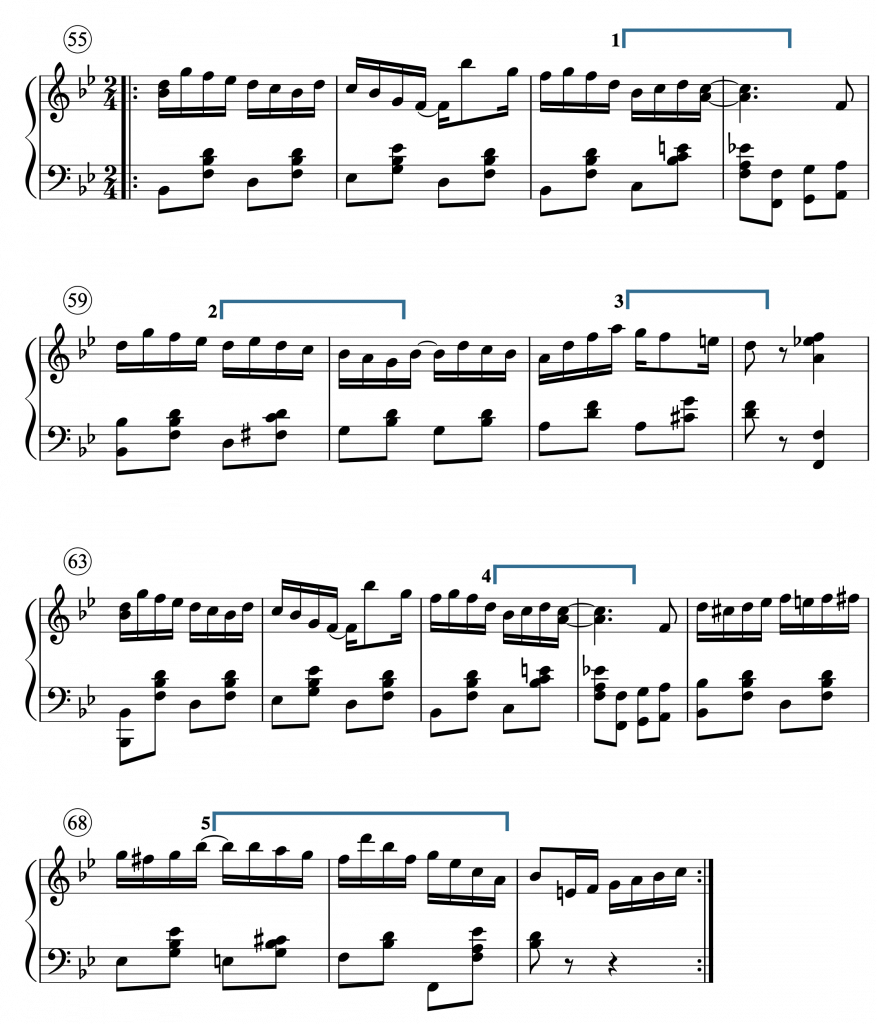 Another way of thinking about applied chords is to imagine them as altered versions of the diatonic chord with which it shares a root.

, and then progresses, like usual, to the dominant chord. This alteration of

turns a regular into a chord that has a dominant function in the key of the dominant.

Take the chord progression Dm7–G–C in C major. We would label this progression as ii7–V–I with Roman numerals. If we change

(F♯) in the Dm chord, we get D7–G–C. In the key of C, we might analyze this progression as II♯7–V–I, noting the change in root and quality. However, we can also note that D major is native to G major; it is a dominant-functioning chord (V) in the key of G—the key in which the following chord is tonic. In other words, we are borrowing the dominant chord from the key of G and applying it to the G-major triad. Thus, we can re-interpret the progression as V7/V–V–I.

Change one note in the following chord to turn it into an applied chord. What Roman numeral would you give the new chord?

Example 5 summarizes applied chords as they relate to diatonic chords with the same root.

A category of chords that provides a sense of urgency to resolve toward the tonic chord. This cateogry of chords includes V and viio (in minor: V and viio).

A scale, mode, or collection that follows the pattern of whole and half steps WWHWWWH, or any rotation of that pattern. This term may also be opposed to "chromatic," in which case "diatonic" indicates that a note belongs to that collection.

A temporary key within a piece that is overall in a different key. For example, a piece in A major may temporarily modulate to E major; E major is a secondary key within A major.

One of many symbols (the sharp (♯), flat (♭), and natural (♮) among others) that alter a pitch

Relating in some sense to the chromatic scale. The term may be used to refer to notes that are outside the given key.

Scale-degree 7 that is one half-step below scale-degree 1. The leading tone is diatonic in major keys, but requires an accidental in minor keys.

Open Music Theory by Megan Lavengood and Kris Shaffer is licensed under a Creative Commons Attribution-ShareAlike 4.0 International License, except where otherwise noted.