The common-tone °7 ( CT°7) and common-tone +6 ( CT+6) chords represent a completely different usage of two chords with which you are already familiar; the fully diminished seventh chord and the German augmented sixth chord. Whereas these chords typically function in a more progressive harmonic context, when employed as common-tone chords, they serve a purely embellishing function and are the result of the culmination of multiple, simultaneous neighbors tones. Common-tone chords share a common tone with the chord being embellished, whereas a

and Ger+6 do not. (NOTE: Ger+6 typically resolves to a cadential

, which does have a common tone with the Ger+6, but remember that the cadential

is not the actual destination chord, it’s a delay of the actual chord which is a dominant chord in root position – a normal Ger+6 does not have any common tones with the dominant chord being embellished). You can expect the embellished chord will either be a major triad or sometimes a Mm7 chord and the Roman numeral to be either

. Minor triads can be embellished in this way too but are far less common so this chapter will focus on major triads and Mm7 chords only. To construct a common-tone chord for a minor triad, the process is the same except that the third of the chord will also be a common tone.

Example 1 goes through the conceptual process of producing a CT°7 chord through the layering of simultaneous neighbor tones. The first system presents a single tonic chord and each three-measure unit expresses a single neighbor tone. The second system combines two neighbor tones from system 1 but they are still a single tonic chord throughout, just with two neighbors instead of one. The final system shows all three neighbors combined into a single chord and is an example of a CT°7 chord. Notice that the chord in the middle has a fully diminished quality, but if you try to wrangle it into being some type of

chord, you’ll come up with

. The problem is, there is no

chord to be found so that analysis wouldn’t represent this music accurately.

Example 1.Demonstration of the conceptual process of how multiple neighbor tones can come together to form a CT°7 chord.

Creating a CT°7 chord is a little different than spelling a traditional chord because it doesn’t have a root (simlar to augmented sixth chords). To build one, focus on the neighboring aspect of the chord. In Example 1, notice that the root of the resolving chord is the common tone so you know that note will be included. Then notice that the 5th of the chord has been doubled (which is very common) and that one of the chordal fifths is embellished by its upper neighbor (G-A-G) and the other is embellished by its lower neighbor (G-F

-G). Finally, look at how the third of the chord is embellished by its lower neighbor (E-D

-E). You can create a CT°7 chord by going through the following procedure:

chord. If it does have a common tone, then it is a CT°7 chord with ONE COMMON EXCEPTION! The common exception involves the cadential

(as mentioned above). Remember the cadential

is not the actual chord, it is an embellishment of the root-position dominant chord being embellished. So, make sure to look past the cadential

) to determine if there is a common tone (see Example 2).

can produce a common-tone that does not relate to CT°7 chords.

A CT°7 chord may resolve to

voice leading that replaces the

line that occurs in the triad-only version.

Example 3.Comparison of a complete neighbor CT°7 that resolves to

While the CT°7 chord is often preceded and followed by the same chord (producing multiple, complete neighbors tones), this is not always the case. Sometimes, incomplete neighbors are used instead. The complete-neighbor examples had some chord,

, the actual CT°7 itself, followed by

again. However, CT°7 chords may be preceded by a different chord,

. The example below demonstrates this situation. Notice that the first CT°7 is surrounded by different chords (

). The arrow shows which chord the CT°7 is embellishing. Just like complete neighbor CT°7 contexts, the embellished chord is the one to focus on, not the preceding chord. This progression is an elaboration of the

progression that you’ve encountered with tonic prolongation but with CT°7 chords filling in the space between each chord providing a much more colorful version of what was a rather simple progression. When listening to the example, try to hear the underlying

progression as its underlying model.

The other category of common-tone chords you’ll encounter (especially in music of the later 19th century) is a German augmented sixth chord (Ger+6) that functions, like the CT°7, in a embellishing capacity. The effect is similar to the CT°7 but a little darker in affect because all three neighbor tones are chromatic in this version instead of just two with CT°7 chords. In short, build a CT°7 and use a m2 neighbor above the 5th of the chord instead of a M2 above like the CT°7 uses. Here’s the procedure for spelling this chord:

When a CT+6 chord is embellishing a I chord (which is usually the case), you can think in terms of solfege to find the notes, if you’re using the moveable Do system. The solfege you need would be the same as that of a Ger+6 chord: Le Do Me/Ri Fi. Because this chord is most often found in major keys, Ri would be a better spelling than Me.

Example 5 below shows both chords ( CT°7 and CT+6) for comparison. Note that the common tone is not always the bass note and that the +6 interval may be inverted to become a °3 instead, but the chord is typically labeled CT+6 in both contexts.

Example 5.Comparison between a CT°7 and CT+6 chord, both as complete neighbors.

and its resolution to

(Example 6). It appears as though the bass is moving from D to F

and back to D, but the F

is not related to the functional bass of the passage.

Example 6.Scott Joplin, “The Sycamore,” mm. 1-4 – A CT°7 that is introduced between the start of the cadential

and its resolution to

In example 7, Chopin uses a

in m. 8 at the conclusion of a parallel period that is occuring over a tonic pedal. This instance is a common-tone chord that is an incomplete neighbor, because the chord before it in measure 7 is

above the tonic pedal. Notice also that Chopin spelled the chord with a C

instead of a B

. Spelling variants do happen with common-tone chords, but the B

spelling in this case would have been advantageous because it would have clarified the neighboring function of that note with surrounding Cs in that voice. 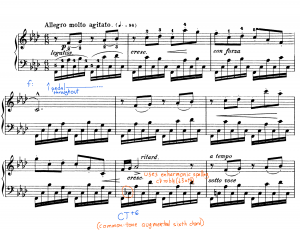 that occurs in the context of a tonic pedal in m. 8.