Stephen Edelston Toulmin (born March 25, 1922) was a British philosopher, author, and educator. Toulmin devoted his works to analyzing moral reasoning. He sought to develop practical ways to evaluate ethical arguments effectively. The Toulmin Model of Argumentation, a diagram containing six interrelated components, was considered Toulmin’s most influential work, particularly in the fields of rhetoric, communication, and computer science.  His components continue to provide useful means for analyzing arguments, and the terms involved can be added to those defined in earlier sections of this chapter. 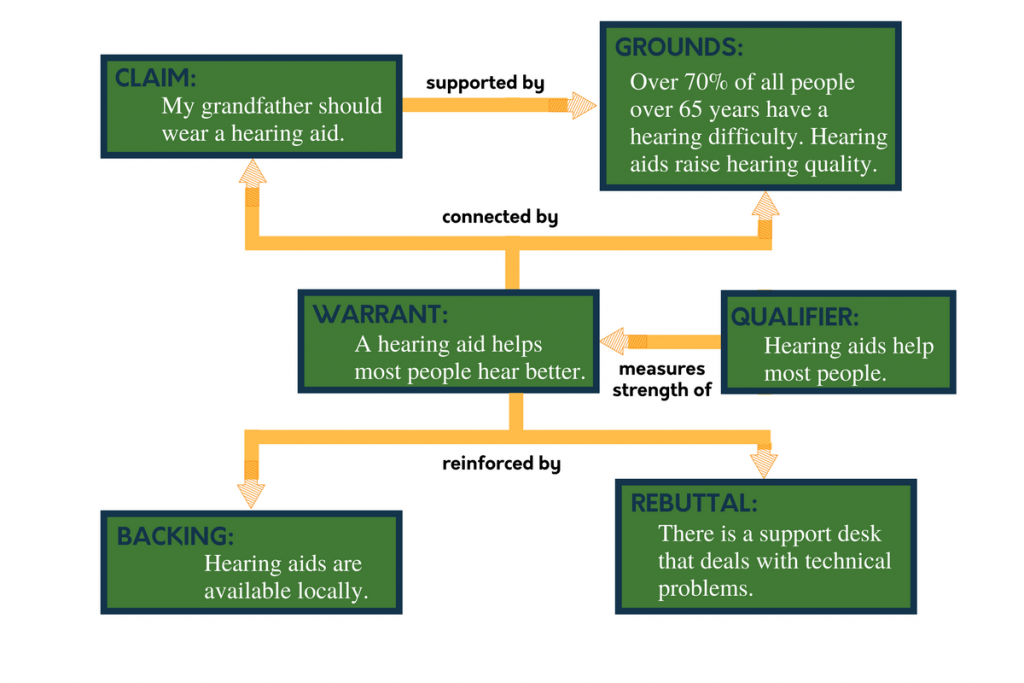 The following are the parts of a Toulmin argument:

My grandfather should wear a hearing aid.

This claim both asks the reader to believe an idea and suggests an action to enact.  However, like all claims, it can be challenged.  Thus, a Toulmin argument does not end with a claim but also includes grounds and warrant to give support and reasoning to the claim.

2. Grounds: The grounds form the basis of real persuasion and includes the reasoning behind the claim, data, and proof of expertise. Think of grounds as a combination of premises and support.  The truth of the claim rests upon the grounds, so those grounds should be tested for strength, credibility, relevance, and reliability.  The following are examples of grounds:

Over 70% of all people over 65 years have a hearing difficulty.

Information is usually a powerful element of persuasion, although it does affect people differently. Those who are dogmatic, logical, or rational will more likely be persuaded by factual data. Those who argue emotionally and who are highly invested in their own position will challenge it or otherwise try to ignore it. Thus, grounds can also include appeals to emotion, provided they aren’t misused.  The best arguments, however, use a variety of support and rhetorical appeals.

3. Warrant: A warrant links data and other grounds to a claim, legitimizing the claim by showing the grounds to be relevant. The warrant may be carefully explained and explicit or unspoken and implicit. The warrant answers the question, “Why does that data mean your claim is true?”  For example,

The warrant may be simple, and it may also be a longer argument with additional sub-elements including those described below.  Warrants may be based on logos, ethos or pathos, or values that are assumed to be shared with the listener.  In many arguments, warrants are often implicit and, hence, unstated. This gives space for the other person to question and expose the warrant, perhaps to show it is weak or unfounded.

4. Backing: The backing for an argument gives additional support to the warrant.  Backing can be confused with grounds, but the main difference is this: Grounds should directly support the premises of the main argument itself, while backing exists to help the warrants make more sense. For example,

This statement works as backing because it gives credence to the warrant stated above, that a hearing aid will help most people hear better.  The fact that hearing aids are readily available makes the warrant even more reasonable.

5. Qualifier: The qualifier indicates how the data justifies the warrant and may limit how universally the claim applies. The necessity of qualifying words comes from the plain fact that most absolute claims are ultimately false (all women want to be mothers, e.g.) because one counterexample sinks them immediately.  Thus, most arguments need some sort of qualifier, words that temper an absolute claim and make it more reasonable.  Common qualifiers include “most,” “usually,” “always,” or “sometimes.” For example,

The qualifier “most” here allows for the reasonable understanding that rarely does one thing (a hearing aid) universally benefit all people.  Another variant is the reservation, which may give the possibility of the claim being incorrect:

Unless there is evidence to the contrary, hearing aids do no harm to ears.

Qualifiers and reservations can be used to bolster weak arguments, so it is important to recognize them.  They are often used by advertisers who are constrained not to lie. Thus, they slip “usually,” “virtually,” “unless,” and so on into their claims to protect against liability.  While this may seem like sneaky practice, and it can be for some advertisers, it is important to note that the use of qualifiers and reservations can be a useful and legitimate part of an argument.

6. Rebuttal:  Despite the careful construction of the argument, there may still be counterarguments that can be used. These may be rebutted either through a continued dialogue, or by pre-empting the counter-argument by giving the rebuttal during the initial presentation of the argument.  For example, if you anticipated a counterargument that hearing aids, as a technology, may be fraught with technical difficulties, you would include a rebuttal to deal with that counterargument:

There is a support desk that deals with technical problems.

Any rebuttal is an argument in itself, and thus may include a claim, warrant, backing, and the other parts of the Toulmin structure.

Even if you do not wish to write an essay using strict Toulmin structure, using the Toulmin checklist can make an argument stronger.  When first proposed, Toulmin based his layout on legal arguments, intending it to be used analyzing arguments typically found in the courtroom; in fact, Toulmin did not realize that this layout would be applicable to other fields until later.  The first three elements–“claim,” “grounds,” and “warrant”–are considered the essential components of practical arguments, while the last three—“qualifier,” “backing,” and “rebuttal”—may not be necessary for all arguments.

Find an argument in essay form and diagram it using the Toulmin model.  The argument can come from an Op-Ed article in a newspaper or a magazine think piece or a scholarly journal.  See if you can find all six elements of the Toulmin argument. Use the structure above to diagram your article’s argument.

Let's Get Writing! by Kirsten DeVries is licensed under a Creative Commons Attribution-NonCommercial-ShareAlike 4.0 International License, except where otherwise noted.