All people, including you, make arguments on a regular basis.  When you make a claim and then support the claim with reasons, you are making an argument. Consider the following:

However, it would be incorrect to say that academic argument and rhetorical argument do not overlap.  Indeed, they do, and often.  A psychologist not only wishes to prove an important idea with research, but she will also wish to do so in the most effective way possible.  A politician will want to make the most persuasive case for his side, but he should also be mindful of data that may support his points.  Thus, throughout this chapter, when you see the term argument, it refers to a broad category including both rhetorical and academic argument.

Before moving to the specific parts and vocabulary of argument, it will be helpful to consider some further ideas about what argument is and what it is not.

Argument vs. Controversy or Fight

Consumers of written texts are often tempted to divide writing into two categories: argumentative and non-argumentative. According to this view, to be argumentative, writing must have the following qualities: It has to defend a position in a debate between two or more opposing sides, it must be on a controversial topic, and the goal of such writing must be to prove the correctness of one point of view over another.

A related definition of argument implies a confrontation, a clash of opinions and personalities, or just a plain verbal fight. It implies a winner and a loser, a right side and a wrong one. Because of this understanding of the word “argument,” many students think the only type of argument writing is the debate-like position paper, in which the author defends his or her point of view against other, usually opposing, points of view.

For a fun illustration of the reductive nature of a mere fight, see “The Argument Clinic” (https://youtu.be/XNkjDuSVXiE, transcript here) skit from Monty Python.

One community that values argument as a type of communication and exchange is the community of scholars.  They advance their arguments to share research and new ways of thinking about topics.  Biologists, for example, do not gather data and write up analyses of the results because they wish to fight with other biologists, even if they disagree with the ideas of other biologists.  They wish to share their discoveries and get feedback on their ideas.  When historians put forth an argument, they do so often while building on the arguments of other historians who came before them.  Literature scholars publish their interpretations of different works of literature to enhance understanding and share new views, not necessarily to have one interpretation replace all others.  There may be debates within any field of study, but those debates can be healthy and constructive if they mean even more scholars come together to explore the ideas involved in those debates.  Thus, be prepared for your college professors to have a much broader view of argument than a mere fight over a controversial topic or two. 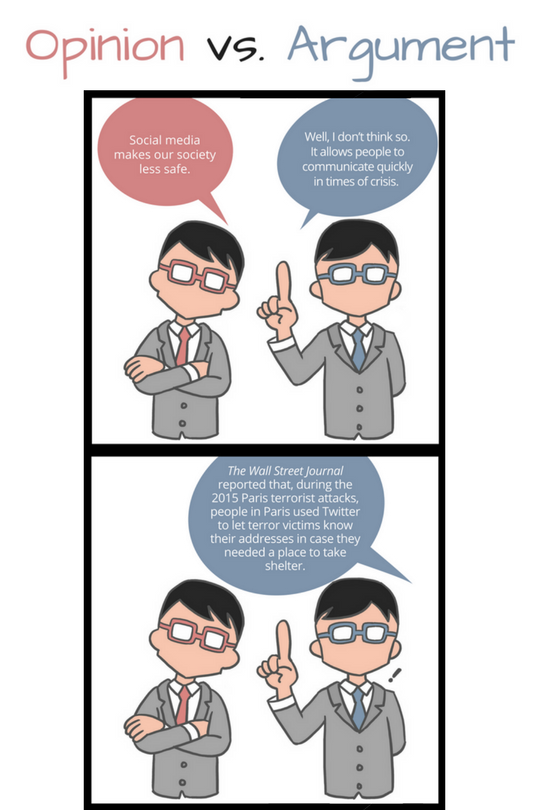 Another point of confusion is the difference between an argument and an essay’s thesis.  For college essays, there is no essential difference between an argument and a thesis; most professors use these terms interchangeably.  An argument is a claim that you must then support.  The main claim of an essay is the point of the essay and provides the purpose for the essay.  Thus, the main claim of an essay is also the thesis. For more on the thesis, see Chapter 4, “The Writing Process.”

Consider this as well: Most formal essays center upon one main claim (the thesis) but then support that main claim with supporting evidence and arguments.  The topic sentence of a body paragraph can be another type of argument, though a supporting one, and, hence, a narrower one.  Try not to be confused when professors call both the thesis and topic sentences arguments.  They are not wrong because arguments come in different forms; some claims are broad enough to be broken down into a number of supporting arguments.  Many longer essays are structured by the smaller arguments that are a part of and support the main argument.  Sometimes professors, when they say supporting points or supporting arguments, mean the reasons (premises) for the main claim (conclusion) you make in an essay.  If a claim has a number of reasons, those reasons will form the support structure for the essay, and each reason will be the basis for the topic sentence of its body paragraph.

Arguments are also commonly mistaken for statements of fact.  This comes about because often people privilege facts over opinions, even as they defend the right to have opinions.  In other words, facts are “good,” and opinions are “bad,” or if not exactly bad, then fuzzy and thus easy to reject.  However, remember the important distinction between an argument and an opinion stated above: While argument may sound like an opinion, the two are not the same.  An opinion is an assertion, but it is left to stand alone with little to no reasoning or support. An argument is much stronger because it includes and demonstrates reasons and support for its claim.

As for mistaking a fact for an argument, keep this important distinction in mind: An argument must be arguable.  In everyday life, arguable is often a synonym for doubtful.  For an argument, though, arguable means that it is worth arguing, that it has a range of possible answers, angles, or perspectives: It is an answer, angle, or perspective with which a reasonable person might disagree.  Facts, by virtue of being facts, are not arguable.  Facts are statements that can be definitely proven using objective data. The statement that is a fact is absolutely valid. In other words, the statement can be pronounced as definitively true or definitively false. For example, 2 + 2 = 4. This expression identifies a verifiably true statement, or a fact, because it can be proved with objective data.  When a fact is established, there is no other side, and there should be no disagreement.

The misunderstanding about facts (being inherently good) and argument (being inherently problematic because it is not a fact) leads to the mistaken belief that facts have no place in an argument.  This could not be farther from the truth.  First of all, most arguments are formed by analyzing facts.  Second, facts provide one type of support for an argument.  Thus, do not think of facts and arguments as enemies; rather, they work closely together.

Arguments can be both explicit and implicit. Explicit arguments contain prominent and definable thesis statements and multiple specific proofs to support them. This is common in academic writing from scholars of all fields.  Implicit arguments, on the other hand, work by weaving together facts and narratives, logic and emotion, personal experiences and statistics. Unlike explicit arguments, implicit ones do not have a one-sentence thesis statement. Implicit arguments involve evidence of many different kinds to build and convey their point of view to their audience. Both types use rhetoric, logic, and support to create effective arguments.

Go on a hunt for an implicit argument in the essay, “37 Who Saw Murder Didn’t Call the Police” (https://tinyurl.com/yc35o25x) by Martin Gansberg.

1. Read the article, and take notes on it–either using a notebook or by annotating a printed copy of the text itself (for help with note-taking on reading material, see Chapter 1, “Critical Reading.” Mark or write down all the important details you find.

2. After you are finished reading, look over your notes or annotations.  What do all the details add up to?  Use the details you have read about to figure out what Gansberg’s implicit argument is in his essay.  Write it in your own words.

3. Discuss your results with a partner or a group.  Did you come up with the same argument?  Have everyone explain the reasoning for his or her results.

An argument in written form involves making choices, and knowing the principles of rhetoric allows a writer to make informed choices about various aspects of the writing process. Every act of writing takes place in a specific rhetorical situation. The most basic and important components of a rhetorical situation are

These components give readers a way to analyze a text on first encounter.  These factors also help writers select their topics, arrange their material, and make other important decisions about the argument they will make and the support they will need.  For more on rhetoric, see Chapter 2, “Rhetorical Analysis.”

Key Takeaways: What is an Argument?

With this brief introduction, you can see what rhetorical or academic argument is not:

Furthermore, you can see what rhetorical argument is:

Let's Get Writing! by Kirsten DeVries is licensed under a Creative Commons Attribution-NonCommercial-ShareAlike 4.0 International License, except where otherwise noted.