Alice Cary was born on Clovernook Farm outside of Cincinnati, Ohio, in 1820 to a family that ultimately had nine children. Alice, along with her sister and life-long companion, Phoebe, became distinguished writers and poets. Although they did not receive much formal education, both girls were educated within their household by their mother and their older sister, Rhoda, and were encouraged to write poetry by both of their parents. Sadly, Cary’s mother died in 1835, with her father remarrying by two years later. This stepmother discouraged studies, focusing instead on the importance of practical skills. Ever determined, Alice studied and wrote at night, after all of her household duties were complete. Shortly after her father’s re-marriage, Alice began sending her poems to newspapers; she had her first poem “The Child of Sorrow” published in a Cincinnati paper when she was eighteen years old. 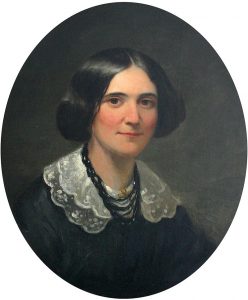 Both Alice and Phoebe are most commonly remembered for being poets, and they did earn a great deal of acclaim (and financial independence) with their 1850 publication of The Poetical Works of Alice and Phoebe Cary.  In fact, Alice’s poem “Pictures of Memory” was praised by Edgar Allen Poe. Today, however, Alice is more remembered for the sketches of her childhood home and the countryside that surrounded it, which she published in three collections Clovernook: Or Recollections of Our Neighborhood in the West (1852), Clovernook Children (1855), and Pictures of Country Life (1859). The sketch “Uncle Christopher”, from Clovernook  The realism that is demonstrated in these sketches offers images of rural life in the same vein as later writers such as Willa Cather.

The Poetical Works of Alice and Phoebe Car, With a Memorial of Their Lives, Mary Clemmer, Public Domain