Born into slavery in 1797, Isabella Baumfree, who later changed her name to Sojourner Truth, would become one of the most powerful advocates for human rights in the nineteenth century. Her early childhood was spent on a New York estate owned by a Dutch American named Colonel Johannes Hardenbergh. Like other slaves, she experienced the miseries of being sold and was cruelly beaten and mistreated. Around 1815 she fell in love with a fellow slave named Robert, but they were forced apart by Robert’s master. Isabella was instead forced to marry a slave named Thomas, with whom she had five children. 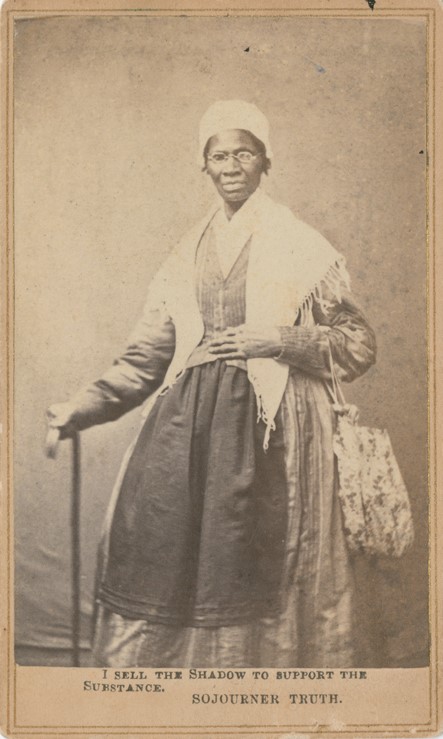 In 1827, after her master failed to honor his promise to free her or to uphold the New York Anti-Slavery Law of 1827, Isabella ran away, or, as she later informed her master, “I did not run away, I walked away by daylight….” After experiencing a religious conversion, Isabella became an itinerant preacher and in 1843 changed her name to Sojourner Truth. During this period she became involved in the growing antislavery movement, and by the 1850s she was involved in the woman’s rights movement as well. At the 1851 Women’s Rights Convention held in Akron, Ohio, Sojourner Truth delivered what is now recognized as one of the most famous abolitionist and women’s rights speeches in American history, “Ain’t I a Woman?” She continued to speak out for the rights of African Americans and women during and after the Civil War. Sojourner Truth died in Battle Creek, Michigan, in 1883.