Born in Essaka, Kingdom of Benin (now in Nigeria) to an Igbo tribe elder, Olaudah Equiano (at the age of eleven) and his sister were kidnapped, separated, and sold to slave traders. He was transported across the Atlantic to Barbados. Along with other captured Africans, he was put up for auction. Although he was not purchased there, he was sent to Virginia. He was sold in 1754 to Michael Henry Pascal (d. 1786), a British Royal Navy lieutenant. 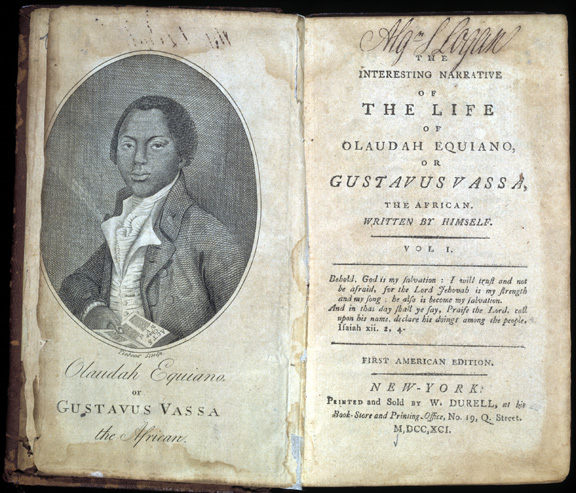 For the next ten years, Equiano, now called Gustavas Vassa, worked on various ships, including the military warships Roebuck and Namur and did service as Pascal’s valet and by hauling gunpowder during the Seven Years’ War with France. Equiano was sent by Pascal to his sister in England, where Equiano learned to read and write in school. He also converted  to Christianity in 1759 and was baptized in St. Margaret’s, Westminster. His godparents, Pascal’s cousins Mary Guerin and Maynard Guerin, later attested to details in Equiano’s autobiography, including his learning English only after coming to England.

Pascal sold Equiano to Captain James Doran who transported Equiano to Montserrat. There Equiano was sold to Robert King, an American Quaker. Equiano assisted King in his business ventures and was allowed to engage in trade for his own profit. In 1767, Equiano bought his freedom from King for forty pounds,  the amount King paid to purchase Equiano. Even as a freedman, he was almost captured as a “runaway slave” and sent to Georgia.

Equiano traveled on scientific expeditions to the Arctic and to Central America as well as on other sailing ventures. He eventually returned to England where he devoted himself to ending the slave trade and the Abolitionist cause. He exposed for examination and condemnation slave atrocities, including the Zong massacre (1781). Because this slave ship ran low on potable water, its crew threw slaves— who were insured as cargo—overboard in order to cash in on the insurance and save water for the rest of the ship’s passengers. In 1789, Equiano published The Interesting Narrative of the Life of Olaudah Equiano: Or, Gustavus Vassa, the African. Now considered one of the first major slave autobiographies in English, it became a bestseller, running through nine editions during his lifetime. It gave firsthand details of slaves chained in ships, whipping, starvation, the division of families, and other horrors committed by so-called Christians. It became a forceful weapon in the fight against slavery, leading to the Slave Trade Act of 1807 which ended the African slave trade for Britain and its colonies. It directly influenced other slave narratives, such as Frederick Douglass’s Narrative of the Life of Frederick Douglass and Harriet Jacobs’s Incidents in the Life of a Slave Girl.

His narrative is characterized by its vivid imagery, humanity, and commitment to Christianity in the face of almost unbearable cruelty and struggle.