John Greenleaf Whittier contributed to the continuing and growing call for    a national literature through his works on New England folklore and history.     He set his most accomplished poem, “Snow-Bound: A Winter Idyll” (1866), in  his childhood home, a farm in the Merrimack Valley. His American voice was sentimental and moralistic; it was also sharp, detailed, and simple. 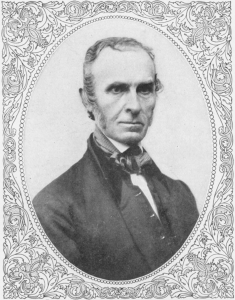 The simplicity may have been influenced by his Quaker faith; this faith certainly influenced his sense of public duty. Beginning in 1828, Whittier wrote for such important newspapers and journals as The American Manufacturer, New England Weekly Review, and The National Era; he also helped found the Atlantic Monthly. Over the course of his public life, Whittier published hundreds of journal articles, pamphlets, essays, and poems on such important social issues as labor conditions and Abolition. In 1833, he served as a delegate to the National Anti-Slavery Convention in Philadelphia. He also was elected to the Massachusetts legislature, founded the Liberty party, and ran for Congress. In 1835, while on a lecture tour, he and the British abolitionist George Thompson were attacked by an armed mob. Though shot at, they escaped unharmed.

Inaddition to these political activities, Whittier devoted a good part of his writing to the Abolitionist cause with such influential works as Justice and Expediency (1833), “The Slave Ships” (1834), and “Ichabod” (1850). This last poem attacked Daniel Webster, who sought to compromise with those who supported slavery and the Fugitive Slave Law.

After the Civil War and Emancipation, Whittier turned his attention again to New England life and land. “The Barefoot Boy” (1855), a popular poem set to music, gave voice to his love of nature and the country life. Home Ballads and Other Poems (1860) memorialized his family, especially his sister Mary who had recently died. The success of his Poetical Works (1869) contributed to his growing fame and prosperity. Both of these were marked at the dinner celebration of his seventieth birthday given by the Atlantic Monthly and attended by seventy guests, including such important American writers as Emerson, Longfellow, and Mark Twain.