Jonathan Edwards was born in East Windsor, Connecticut to Reverend Timothy Edwards and Esther Stoddard Edwards, daughter of the Reverend Solomon Stoddard (1643–1729), an important religious figure in western Massachusetts. Nurtured by Calvinistic authorities in the Puritan Faith, Edwards nevertheless relied on his own understanding and observation of the world around him. Before reaching his teens, he refuted materialism in an essay and wrote a study of the flying spider. Upon entering Yale at the age of thirteen, he came to terms (on his own terms) with Puritan doctrine, particularly the idea of the elect and of God’s complete sovereignty. As strict Calvinists, the Puritans held that God to be all-powerful and completely sovereign and all humans to be naturally depraved. God elected only a few for salvation. 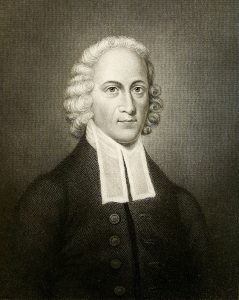 Edwards’ fervent acceptance of Puritan doctrine was heightened by his study of John Locke’s (1632–1704) Essay Concerning Human Understanding (1689). This philosophical treatise encouraged empiricism, experience, and sensation. It tied abstract ideas to concrete particulars. To paraphrase the later Romantic poet John Keats (1795–1821), Edwards came to feel his abstract faith in his pulses. He recorded his conversion in his Personal Narrative (1765). After graduating from Yale, Edwards was ordained as minister at Northampton, Massachusetts, assisting his grandfather Solomon Stoddard before succeeding him upon his death. In 1727, Edwards married Sarah Pierrepont; together, they raised ten children.

As minister, Edwards sought to bring his congregation to an understanding of the Puritan faith that involved a physical (as well as metaphysical) experience of faith. His preaching was so successful that it contributed to the wave of revivalism now known as the first Great Awakening that swept through the colonies in the 1730s and 1740s. Listeners to Edwards’ sermons were gripped by a full-bodied conviction of God’s mercy for the elect, a conviction characterized by strong emotions and sentiment.

The Great Awakening led to schisms within churches with some members opposing revivals as sources of hysteria and disorder, particularly as they empowered uneducated itinerant ministers, inspired individual authority in many women, and converted a number of blacks to Christianity. The early sovereignty of Puritan faith in America thus gave way to more liberal and differing denominations and even deism. Edwards himself tried to tamp down these shifts with such works as A Faithful Narrative of the Surprising Work of God (1737), a work seeking to balance emotionalism and mindfulness, and his A Treatise Concerning Religious Affections (1746), a work that distinguished genuine from false religious experiences.

In 1741, Edwards gave the sermon Sinners in the Hands of an Angry God, a sermon emphasizing human depravity and God’s unfathomable mercy. It uses natural and observable details and terrifying images to give a compelling depiction of that yawning hell burning beneath all, particularly the unwary and unready. Its depiction of punishment almost, but ultimately does not, overwhelm the sermon’s purpose: the promise of God’s mercy.

Edwards exhorted a return to traditional Puritan orthodoxy, claiming authority to denounce “backsliders” in his congregation and refuse communion to those sanctioned by the Half-Way Covenant, that is, the members of his church who did not publicly declare themselves as saved. In 1750, his congregation rejected Edwards by vote and dismissed him from the church. He then served as missionary to the Housatonnuck Indians in Stockbridge. In 1758, he became president of the College of New Jersey, now known as Princeton. He died from smallpox after receiving an inoculation against this infectious disease.

Figure 2. Sinners In The Hands Of An Angry God, Title Page 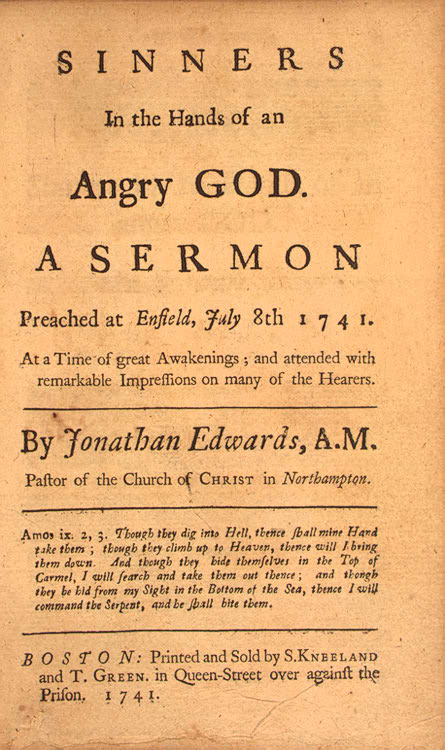