Lydia Maria Child was born in Medford, Massachussetts on February 11, 1802. Lydia was assisted in her early studies by her brother, Convers Francis, who was afterwards professor of theology in Harvard College. Her first village teacher was an odd old woman, nicknamed “Marm Betty.” She studied in the public schools and one year in a seminary. In 1814 she went to Norridgewock, Maine, to live with her married sister. 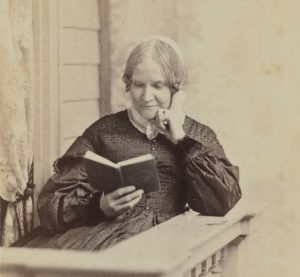 After several years, she returned to Watertown, Mass., to live with her brother. He encouraged her literary aspirations, and in his study she wrote her first story, “Hobomok,” which was published in 1823. It proved successful, and she next published “Rebels,” which ran quickly through several editions. She then brought out in rapid succession ” The Mother’s Book,” which ran through eight American, twelve English and one German editions, “The Girl’s Book,” the “History of Women,” and the “Frugal Housewife,” which passed through thirty-five editions. In 1826 she commenced to publish her “Juvenile Miscellanv.”

In 1828 she became the wife of David Lee Child, a lawyer, and they settled in Boston, Mass. In 1831 they became interested in the anti-slavery movement, and both took an active part in the agitation that followed. Mr. Child was one of the leaders of the anti-slavery party. In 1833 Mrs. Child published her “Appeal in Behalf of that Class of Americans Called Africans.” Its appearance served to cut her off from the friends and admirers of her youth. Social and literary circles shut their doors to her. The sales of her books and subscriptions to her magazine fell off, and her life became one of battle. Through it all she bore herself with patience and courage, and she threw herself into the movement with all her powers.

While engaged in that memorable battle she, with her husband, supervised editorially the “Anti-Slavery Standard,” in which she published her admirable “Letters from New York.” During those troubled times she prepared her three-volume work on “The Progress of Religious Ideas.” She lived in New York City with her husband from 1840 to 1844. Her anti-slavery writings aided powerfully in bringing about the overthrow of slavery, and she lived to see a reversal of the hostile opinions that greeted her first plea for the enslaved.

Woman of the Century: Fourteen Hundred-Seventy Biographical Sketches Accompanied By Portraits of Leading American Women in All Walks of Life,  Frances E. Willard And Mary A. Livermore, editors, CC-BY-SA