The second of nine children and born in 1819 to a Long Island farmer and carpenter, Walt Whitman is both the journeyman poet of American-ness and its champion. A journalist and newspaper editor throughout his life, Whitman worked as a law clerk,  a schoolteacher,  a printer, a civil servant, and a hospital aide, but he was always writing; from his teenage years until his death, his byline was on constant view. Contemporary reports suggest that Whitman was an industrious worker but that he was often accused of idleness because his habit of long midday walks contrasted sharply with nineteenth-century  attitudes toward work. In “Song of Myself,” Whitman addressed these critics directly by writing, “I loafe and invite  my soul,/ I lean and  loafe  at  my  ease  observing a spear of summer grass” (4—5). For Whitman, too much industry dulled the ability to celebrate the ordinary. In the preface to the first edition of Leaves of Grass in 1855, Whitman expounds on his  love for the common: “Other states indicate themselves in their  deputies . . . but the genius of the United States is not best or most in its executives or legislators, nor in its ambassadors or authors or colleges or churches or parlors, nor even in its newspapers or inventors . . . but always most in the common people.” Whitman’s love for the common people that he encountered and observed in the urban centers of the north is expressed in all of his poetry; if his British contemporary Alfred Lord Tennyson is the national poet of mourning, then Whitman is the national poet of celebration. 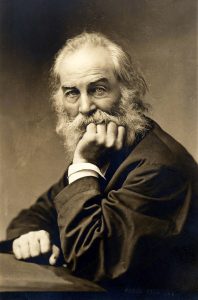 Many readers feel confused and disoriented when reading Whitman for the first time. Without using the aid of rhyme and meter as a guide, Whitman’s poetry may initially appear disjointed and meandering, but at the same time readers often take great comfort in the simplicity of the language, the clarity of the images, and the deep cadences, or rhythms, of the verse. Such contradictions are at the heart of Whitman’s work. Much of Whitman’s success and endurance as a poet comes from his ability to marry embedded cultural forms to the needs of a growing and rapidly modernizing nation. Whitman first came to wide public attention with the publication of the first edition of Leaves of Grass in 1855 when he was just twenty- five years old. Grand in scope if not in size, the first edition established Whitman as a poet who loved wordplay and common images; by the time of his death in 1892, Whitman had expanded the initial collection of just twelve poems over the course of six editions to one that ultimately included more than 400 poems. The selection included here largely samples Whitman’s early poetry up through the Civil War. In the selections from Song of Myself and “Crossing Brooklyn Ferry,” we see Whitman at his most iconic: sweeping views of everyday life that freely mingle high and low culture. Yet the poet of the common man did not spend all of his days gazing at his fellow Americans. In the final selection from Whitman, we see Whitman rising as a national poet with “O Captain! My Captain!” one of two poems on the death of Abraham Lincoln. An urban poet who lived almost his entire life in New York, New Jersey, and Washington, DC, the enduring appeal of his works testifies to his ability to connect the great and the common through language.