Tecumseh  was  born  a  Shawnee  in what is now Ohio. His father was a Shawnee chief who fought white settlers and died in the Battle of Point Pleasant (1774). Tecumseh, too, would fight the ever-increasing westward expansion of white settlement. In 1811, William Henry Harrison (1773–1841) would describe Tecumseh to then secretary of war William Eustis (1753–1825) as an “uncommon genius” capable of founding an empire. Tecumseh’s brother Tenskwatawa (c. 1775–1836), known as the Prophet, would also caution against Native American assimilation to white culture. 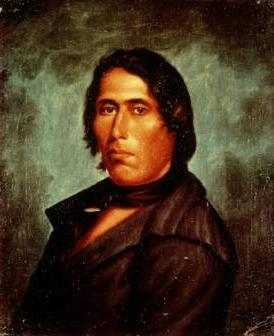 In 1809, the Shawnees ceded huge tracts of their land to the United States. Tecumseh had already declared his view that such cession of land by one tribe was illegal without  the  consent  of all other tribes. He responded to his tribe’s cession of land by forming a multi-tribal alliance, a great confederation intended to stem the tide of white  settlement.  Tecumseh  gave  his  Speech  to the Osage as part of this unifying effort. With careful rhetoric, it persuades its audience of their commonality, of their all being children of the Great Spirit and enemies of the whites.

To add to the forces he already gathered, Tecumseh traveled in the south, leaving Tenskwatawa to act as leader. During Tecumseh’s absence, Tenskwatawa’s forces were attacked and defeated by Harrison at the Battle of Tippecanoe (1811). Harrison would later successfully use this victory over the Native Americans when running for president, with John Tyler as his vice-president, under the slogan “Tippecanoe and Tyler, too!”

After Tippecanoe, Tecumseh failed in subsequent attempts to unite tribes to defend their way of life against the whites. He fought with the British in the War of 1812 and was killed in the Battle of the Thames, near Thamesville, Ontario.

Tecumseh’s Speech to the Osages was recorded in John Dunn Hunter’s (1798– 1827) Memoirs of a Captivity among the Indians of North America (1823). Dunn claimed to have heard this deeply-moving speech when he was ten years old. He lived as an Osage captive for fourteen years, publishing his memoir seven years after his release. Authentic or not, it is not unusual for a Native American’s words or speech to be filtered (as this speech is) through whites.

Author Introduction-Tecumseh (1768–1813) by Jenifer Kurtz is licensed under a Creative Commons Attribution 4.0 International License, except where otherwise noted.