William Apess is credited as the  first Native American to publish an extensive autobiography, A Son of the Forest (1829). In it, he writes that his father was a white man and his mother was the granddaughter of Metacom, or King Philip (instigator of King Philips War of 1676). His mother may have been part African American. It is possible that Apess was indeed a descendent of Metacom; he may also have descended from the Pequot tribe, a tribe that Apess’s father joined. Apess was born in Colrain, Massachusetts. His autobiography describes his childhood as painful,  as he was left to the care of poor, alcoholic, and physically-abusive grandparents. He attributed their abuse in good part to the whites who introduced alcohol to Native Americans. At the age of five, Apess was indentured as a laborer. The family to which he was indentured sent him to school in the winters; his schooling lasted six years. He was also introduced to Christianity during this time. 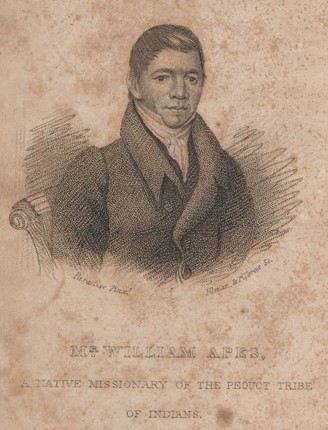 During the War of 1812, Apess joined the American militia and participated in the American attack on Montreal. From 1816 to 1818, he lived once more among the Pequots. Apess came to appreciate the egalitarian views of evangelical Methodism; being particularly drawn to the enthusiasm of their camp revivals and services, he chose to be baptized a Methodist. After obtaining a license to “exhort” at church services, he became an itinerant preacher. According to his autobiography, he encountered barriers placed between himself—as a Native American—and the church hierarchy, only later being ordained as a Methodist minister.

He certainly resented the prevalent mistreatment of Native Americans by whites, lamenting their unjust laws and lack of Christian fellowship. Preaching across the state of Massachusetts, Apess became involved in the ultimately successful Mashpee Revolt of 1833 against the state government, with the Mashpee protesting their being treated as wards of the state. With Apess’ help, the Mashpee petitioned the state government, declaring their refusal to allow any whites to “come upon our plantation, to cut or carry off wood, or hay, or any other article without our permission.” They claimed their right to self-governance, as they possessed the constitutional rights of freedom and equality.

Besides his autobiography, Apess wrote  sermons,  conversion  narratives,  and political commentaries. His An Indian’s Looking-Glass for the White Man insists that whites look at their racial prejudice and mistreatment of people of color, especially Native Americans. It joins a line of protest that would lead to civil rights writers like Henry David Thoreau and to Abolitionist writers like Frederick Douglass.