Best known today for her young adult novel Little Women (1869), Louisa May Alcott also published a novel on women and labor; short stories on nurses and hospitals, racism, and the abuses of slavery; and a number of sensation novels with such lurid subjects as suicide and drug addiction. Born in Germantown, Pennsylvania, but raised mainly in Boston and Concord, Alcott benefited from her father’s views on progressive education as well as friendships with such local celebrities as Emerson and Thoreau. 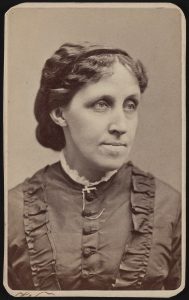 In 1843, Amos Bronson Alcott (1799– 1888) founded Fruitlands, a utopian community near Concord that banned meat and money, and he brought his wife and four daughters to live there. Its idealism foundered in its practice within a year’s time. Because he had invested his own funds, the Alcott’s subsequently suffered financial hardship for years. Abigail May Alcott (1800–1877) tried earning money through social work before running an employment agency. Amos held paid “conversations” on intellectual subjects. Alcott was determined to contribute her fair share through paid work then generally open to women, work such as sewing, teaching, and writing. In 1852, she placed a paid piece in The Olive Branch. Two years later, she published Fabled Flowers, a collection of children’s stories. And in 1860, she published her short story “A Modern Cinderella” in the prestigious Atlantic Monthly.

A long-fervent abolitionist—likely due to her maternal uncle Samuel May (1797–1871) who was an important abolitionist in Boston—Alcott diverted her efforts from writing to supporting the Civil War. She did what most women with similar intent were then allowed to do: work in a hospital treating wounded soldiers. Starting in 1862, Alcott worked at the Union Hotel Hospital as a member of the nursing corps, where she treated amputees and the dying. Early in the next year, she caught typhoid pneumonia. As with much medical practice in those days, its treatment was as bad—if not worse—than the disease. She was treated with mercury and suffered the aftereffects, including fatigue and neuralgia, for the rest of her life. She gave up nursing and returned to writing.

She drew from her nursing experiences in Hospital Sketches (1863) and she continued to contribute to the war effort by writing about the abuses of slavery. Using the pseudonym of A. M. Barnard, she wrote sensational pieces in the Gothic mode—stories that were not attributed to Alcott until the 1980s through the work of Madeleine Stowe. After the war ended, Alcott worked as editor for Mercury Museum, a children’s magazine. At the urging of Thomas Niles, an editor at Robert Brothers, Alcott also began writing her novel Little Women. Based on her childhood, the novel depicted the early literary efforts and reading interests of four sisters, the death of one (probably inspired by Elizabeth Sewall Alcott, who died at the age of twenty-two in 1858, weakened by scarlet fever), and their opportunities in and through marriage. Reflecting the struggles she herself faced in poverty and the professional restrictions placed on women at that time, Alcott’s character Jo sought and gained independence and the ability to make significant contributions to society through her own writing and marriage to Professor Bhaer who eventually ran a co-educational school with Jo’s help.

Despite her poor health, Alcott continued to publish novels, even as she cared for her adopted niece and, eventually, her ailing father who died two days before she did.