The pseudonymous Fanny Fern (born  Sara  Willis  Parton)  received her education at Catherine Beecher ‘s Hartford Female Seminary in Hartford, Connecticut. She began writing soon after graduating, contributing articles to The Puritan Recorder, a newspaper run by her father, Nathaniel Willis (1780– 1870). As marriage was considered the main vocation available to women at this time, Fanny Fern married Charles Harrington Eldridge in 1837. They had three children, with the eldest, Mary, dying at the age of seven. A year later, Eldridge died, leaving Fanny Fern without clear means of support. Her father consequently convinced her to marry Samuel P. Farrington in 1849. Finding him to have a repulsive and jealous nature, Fanny Fern took the remarkable step of leaving her husband, leading to a somewhat scandalous divorce in 1857, and then turning to writing as a profession by which to earn her living. 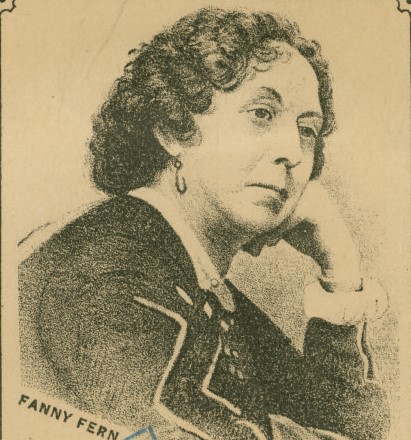 Her writing focused on issues of immediate concern to herself as a woman, such as domesticity, women ‘s rights, the double standard, and prostitution. Her searing, logical, clear-eyed, and humorous satirical pieces won her a large readership, even as her irony and mockery debunked gender stereotypes. Her children ‘s book Little Ferns for Fanny ‘s Little Friends (1853) sold 100,000 copies. She followed this success with the autobiographical novel Ruth Hall: A Domestic Tale of the Present Time (1854), a work criticizing the prevailing ideology of separate spheres that relegated women to the private sphere. Through this criticism, she made a strong case for women ‘s right to earn their living through work in the public sphere.

Fanny Fern exemplified the ability of women to earn their living and so gain autonomy and comparative freedom. She became the highest paid columnist in America with her Fanny Fern ‘s Column. She also wrote best-selling books and bought herself a Manhattan brownstone, where she lived with her third husband, James Parton, until she died of cancer in 1872.