Angelina Grimké was born in Charleston, South Carolina to a wealthy father and slave owner, John Gachereau Grimké. Angelina was greatly influenced by her sister, who at thirteen years older than her was officially also her godmother, Sarah. After Sarah converted to the Quaker faith during a visit to Philadelphia, Angelina followed suit in 1829. By 1835, Angelina’s belief in the abolitionist cause became publicly apparent when she wrote a sympathetic letter dated “8th Month, 30th, 1835” to W. L. Garrison, of The Liberator. This was followed in 1836 by one of her two most famous pieces, Appeal to the Christian Women of the South. In 1837, she wrote her other most well known texts, responding to Catharine Beecher’s Essay on Slavery and Abolition in a series of letters to Miss Beecher on the Slave Question (1837), which were published in the Liberator. 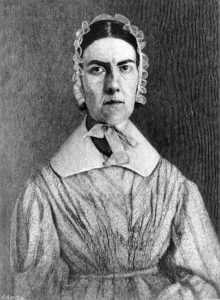 In 1836, at the invitation of Elizur Wright, corresponding secretary of the American Anti-Slavery Society, Angelina, accompanied by Sarah, began giving talks on slavery, first in private and then in public. By 1837, when they set to work in Massachusetts, they had to secure the use of large halls for their public addresses. Their speaking from public platforms resulted in a letter issued by some members of the General Association of Congregational Ministers of Massachusetts, calling on the clergy to close their churches to women exhorters; Garrison denounced the attack on the Grimké sisters and Whittier ridiculed it in his poem “The Pastoral Letter.”

In 1838 Angelina married Theodore Dwight, a reformer, abolition orator, and author of several anti-slavery books including The Bible against Slavery (1837), American Slavery as It Is (1839). They lived, with Sarah, at Fort Lee, New Jersey, in 1838-1840, then on a farm at Belleville, New Jersey, and then conducted a school for black and white alike at Eagleswood, near Perth Amboy, New Jersey, from 1854 to 1864.  Angelina did no public speaking after her marriage, except for an address at Pennsylvania Hall (Philadelphia), which was destroyed by a mob immediately afterwards. In 1864 Angelina, Thomas, and Sarah moved to Hyde Park, Massachusetts, where they continued to work as educators. Angelina died on October 26, 1879, in Hyde Park.