21 Introduction to Literature of Colonial America

The literature of this section highlights the different groups who traveled from England to the new world. Some of these groups came for the purpose of practicing their religion freely, but many came for secular reasons. The Jamestown colony in Virginia (founded in 1607), a territory which originally included not only the current state of Virginia but also the northern parts of North Carolina up to the Long Island Sound in New York, was founded as a commercial venture. Those traveling on the Mayflower founded the colony at Plymouth, Massachusetts in 1620. This group represented a mix of goals, as some colonists wanted to build a religion separate from the Church of England—known as the Separatists—and some had commercial interests in the new world. This mix of interests was a motivating factor behind the Mayflower Compact. The most religiously focused early colony was that of the Puritans, a group of around 1000 Puritan refugees who settled in Massachusetts Bay in 1630. Their desire was to purify the Church of England, and their colony consisted of a devout group of people (men, women, and children) who were dedicated to that goal. 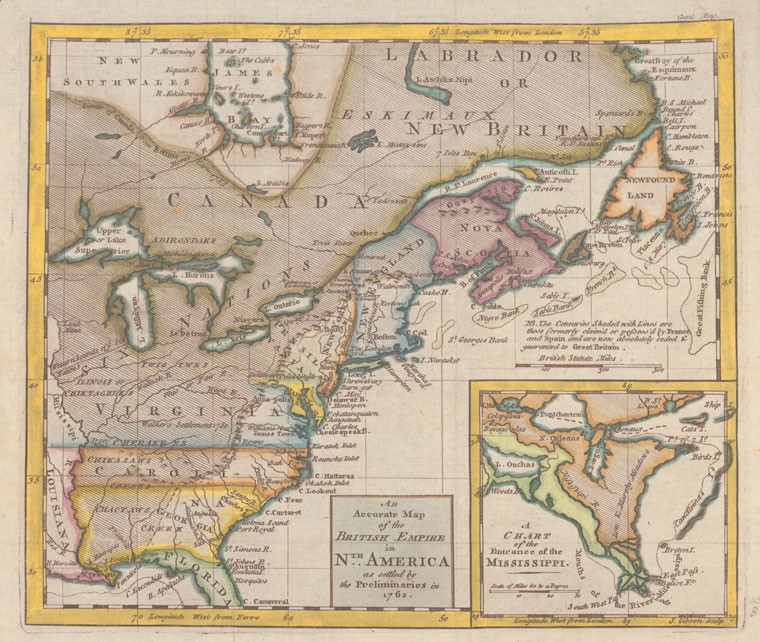 More colonies soon joined those in Massachusetts and Virginia. In 1632, Lord Baltimore (1605–1675) was given a charter for land north of the Potomac River. A Catholic, Baltimore established the colony of Maryland as a place of religious tolerance. A charter for the Carolinas, a territory which extended well beyond the modern borders of those states, was granted in 1663 and settlers established one of the first colonies under this charter near Charleston, South Carolina. In 1681, Pennsylvania was granted by King Charles II to William Penn (1644–1718) in repayment of a debt owed to Penn’s father. The colony became a refuge for members of the Society of Friends or Quakers, as Penn was a recent convert to the denomination. Georgia was the last of the original colonies. Founded in 1732, the colony was intended primarily as a bulwark between the English colonies to the north and the Spanish colonies to the south.

Certainly, this ongoing expansion of English colonies caused continual tension with the Native American tribes already occupying the territory. The Powhatan Confederacy, a union of tribes occupying the tidewater Virginia region, alternately collaborated with and fought against the Jamestown colony from its founding until 1645, when the English forced the confederacy to surrender and cede land. In New England, the Pequod War (1636–1638) was one of the first significant fights between the colonies in Massachusetts and the local tribes, pitting the Pequod tribe against the Massachusetts Bay, Plymouth, and Saybrook colonies and their allies, the Narragansett tribe. The natives of New England continued attempting to hold back English encroachments, making their last major effort when the Wampanoag, Narragansett, and other allied tribes, led by Metacom (1638–1675)—called King Philip by the English—attacked frontier towns. The so-called King Philip’s War lasted from 1675 to 1676, when Metacom was captured and executed.

The use of African slaves in the colonies also grew during this century. African slavery had first been introduced to North America by the Spanish, especially after the Catholic Church started cracking down on enslaving Native Americans. Slaves were first brought to the English colony of Jamestown in 1619, to Connecticut in 1629, and to Massachusetts in 1637. The widespread adoption of slavery languished initially as it proved to be too expensive of an option for the struggling colonists. Indentured servants were a more economical option, but as wages rose in England toward the end of the century and dried up the supply of indentured servants, the use of enslaved Africans grew in the colonies. Though slavery was most prevalent in the southern colonies because of their greater focus on agriculture, the New England colonies were the first to codify slavery (in Massachusetts in 1641) and the first to forbid it (in Rhode Island in 1652). Even before America was a nation officially, America had a slavery problem.

While the Puritans were only one of many groups settling the English colonies, they were the one with the most cultural power. For that reason, it is necessarily to understand who they were and how they saw the world to understand many of the readings of this section. Overall, the Puritans were people who felt that the Church of England, otherwise known as the Anglican Church, retained too much of the doctrine and culture of the Catholic Church after the Protestant reformation. Their name derived from their desire to purify the church of these Catholic aspects. There were also non-separatist and separatist groups within the Puritans as a whole. The non-separatists, like John Winthrop’s company, believed that the Puritans should remain within the Anglican Church and correct it from within the system; the separatists, represented by William Bradford’s Plymouth company, felt the Church of England was a lost cause from which the Puritans should separate themselves. The restoration of King James I to the throne and the subsequent persecutions of dissenters made the distinction moot. The only way to safely practice views that differed from the orthodoxy was to put considerable distance between oneself and English authorities, which both Winthrop’s and Bradford’s groups did.

The Puritans came to the new world with the goal of building a community constructed around religious principles that could stand as a model—a “city upon a hill,” as Winthrop put it—for a Christian community. The Puritans subscribed to Calvinist theology, embracing Calvinism’s assumptions about humanity and its relationship to God. Calvinism held that mankind was born depraved as a result of Adam’s original sin. The presence of sin within the human soul meant that all of man’s impulses, desires, and beliefs were tainted. The Calvinists believed that humanity was incapable of achieving salvation on their own. Only God’s intervention could save people from the damnation they deserved.

According to Calvinism, some of the faithful will be saved because of unconditional election. Election, or God’s decision to replace a person’s original, depraved spirit with a clean one capable of understanding and following God’s will, could not be earned through good behavior; it was unconditional in that it had nothing to do with choices the person made or would make. It was also limited to a relatively small number of people rather than all of humanity. A logical outgrowth of these points of theology was the concept of predestination, which Calvin
described in the Institutes of the Christian Religion  as “the eternal decree of God, by which He hath determined in Himself what He would have to become of every individual of mankind . . . . eternal life is foreordained for some, and eternal damnation for others.” Whatever one’s predestined fate was, one could do nothing to change it. Yet, the Puritans held that one should always behave piously because one did not know one’s destined outcome. Their society emphasized an attitude of indifference toward material things—to “wean” themselves of their natural attraction to the worldly—as well as to personal relationships, including one’s own family. This was not to encourage hard-heartedness but rather to make spiritual things the main priority of one’s life because the things of this world will not last; only the life of the spirit was permanent for the Puritans.

Given their beliefs in the total fallibility of mankind, Puritans looked outside of themselves for guidance in following God’s will. The first source of guidance was the Bible, which the Puritans took to be the most direct expression of God’s will. The Puritans, like other scholars of the Bible before them, believed in a typological relationship between the Old Testament and the New Testament. However, the Puritans did not confine typological interpretation to the Bible alone. Typology assumes that all of human history and experience is part of a larger pattern of meanings that communicate God’s will, so any event—as big as smallpox decimating the native populations in greater numbers than the colonial populations or as small as a snake failing to ingest a mouse as recorded in John Winthrop’s journal—could be considered part of that pattern and signs of God’s approbation or disapprobation.

Despite vigorous policing of their theological borders, the Puritans’ power eventually faded along with the membership of the denomination by the end of the seventeenth century. Initially, the bar for membership in the church was quite high. Believing that only the elect, or those who are destined to be saved, should be members of the church and thereby be able to choose leaders for both the church and the state, prospective members were required to testify of their conversion experience and be interrogated by the other members of the church. It was a rigorous experience that more and more people decided to forego, and eventually, church members in the colonies were outnumbered by non-church members. To increase their ranks and hold on to political power, Puritan churches adopted the Half-Way Covenant in 1662. Under this covenant, the children of church members could become members without testifying to their conversion.  Despite this measure, the political power of the Puritan churches continued to decline, though their cultural power continues to influence American culture.

In the spirit of purification and a return to a simpler practice, many of the works in this section demonstrate the Puritan aesthetic of plain style. In contrast to the more ornate style of European writers like William Shakespeare, the Puritans and some other Protestant denominations felt that the best style was that which lacked embellishment or ornamentation and strove for simplicity and accessibility to the average person. Plain-style writing typically eschewed classical allusions, preferring to use figurative language originating either in the Bible or in everyday experience; was didactic (intended to teach a lesson) rather than entertaining; and featured limited variation in syntactical structures—though those structures might seem complex to a modern reader. This aesthetic can also be seen in the narrow color range of Puritan clothing and the distinct lack of gilding, statuary, and altars in Puritan churches.

American Literature I: An Anthology of Texts From Early America Through the Civil War by Jenifer Kurtz and Wendy Kurant is licensed under a Creative Commons Attribution-ShareAlike 4.0 International License, except where otherwise noted.