Born in New York into  a  well-to-do family, Philip Freneau was tutored  at home before entering the College of New Jersey (now Princeton University). The two important focuses of his future work—that is, politics and literature— might be discerned in two important friendships he made there, with James Madison, a future president, and Hugh Henry Brackenridge (1748–1816), a future novelist. He and Brackenridge collaborated on a commencement poem entitled The Rising Glory of America. A humanist and deistic optimist, Freneau thus early on in his writing expressed hope for America as a separate, democratic—and utopian—nation. 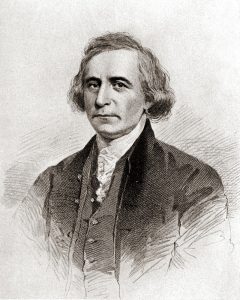 After graduating, Freneau taught briefly then traveled in 1776 to the West Indies to work as secretary on a plantation. His poem “The Beauties of Santa Cruz” reveals both the beauties of nature there and the misery of the impoverished and enslaved; indeed, it curses the ship that brought slaves to that island. After leaving the West Indies in 1778, Freneau took to the seas himself, serving as a seaman on a blockade runner. While on an American ship, he was captured and taken prisoner by the British. His poem “The  British Prison Ship” (1781) describes his brutal treatment by the British while their prisoner.

With harsh invective, he continued to attack the British and support the Revolution, most particularly through his work as journalist and editor of The Freeman’s Journal, an anti-British newspaper. During this time, he became known as the Poet of the Revolution. After  the  war,  Freneau  edited  The  New York Daily Advertiser and established and edited the anti-Federalist journal The National Gazette. In 1791, he worked as translating clerk in the Department of State of Thomas Jefferson, an avowed Democratic-Republican and then secretary of state. During that time, Freneau also vigorously attacked the Gazette of the United States, a Federalist vehicle edited by John Fenno (1751–1798) and supported by Alexander Hamilton, an avowed Federalist and opponent of Jefferson’s. Through these critical pieces, Freneau became known as a powerful political satirist and is now considered a forerunner in satirical journalism. Coinciding with Jefferson’s withdrawal from politics in 1793, Freneau’s National Gazette folded.

Freneau subsequently supported himself through captaining trading vessels and farming. He also wrote and published—by his own hand, with his own printing press—various poems and essays, with collections of his  work  appearing  in  1795  and 1799. The love of nature and focus on the personal in his poetry strikes an early Romantic note in American literature. He offset the corruption of developing urbanism through what he described as the simplicity of Native American life.

His poetry remains remarkable for its concreteness, sensuality, and intensity, qualities that herald the work of James Fenimore Cooper, Ralph Waldo Emerson, and Herman Melville. Freneau died in 1832 from exposure during a blizzard.