Despite this dependence, Bradstreet showed independence of mind and spirit quite remark- able for a woman of her era. She felt that the Bible was not fulfilling the religious enlightenment and transcendence she sought. In America, she eventually saw firsthand, so to speak, the hand of the God to whom she would devote herself. Even as she fulfilled a woman’s “appointed” domestic role and duties as wife and mother, Bradstreet realized her individual voice and vision through the poetry she wrote from her childhood on. Her poetic ambitions appear through the complex poetic forms in which she wrote, including rhymed discourses and “Quaternions,” or four- part poems focusing on four topics of fours: the four elements, the four humors, the four ages of man, and the four seasons. Her ambitions show also in the poets whose work she emulated or learned from, poets including Sir Philip Sidney (1554–1586), Edmund Spenser (1552–1599), and John Donne (1572–1631).

Her ambition may not have been to publish her work. It was due to another male relative, her brother-in-law John Woodbridge (1613–1696), that her manuscript of poems was published. He brought the manuscript with him to London where it was published in 1651 as The Tenth Muse Lately Spring Up in America, By a Gentlewoman of Those Parts. The first book of poetry published by an American, it gained strong notice in England and Europe. 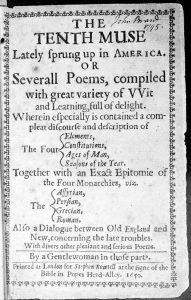 These poems use allusion and erudition to characterize Bradstreet’s unique, “womanly” voice. Poems later added to this book, some after her death, augment this voice through their simplicity and their attention to the concrete  details  of daily life. With personal lyricism, these poems give voice to Bradstreet’s meditations on God and God’s trials—such as her own illness, the burning of her house, and the deaths of grandchildren—as well as God’s gifts, such as marital love.