Augmented sixth chords are a category of chromatic predominant harmonies whose name is derived from the inclusion of a very specific interval: the sixth between le and fi [latex](\downarrow\hat6–\uparrow\hat4)[/latex]. Each augmented sixth chord (Italian, French, and German) contains one or two other scale degrees in addition to this interval, as summarized in the chart below and illustrated in Example 1. Augmented sixth chords can occur in both major and minor keys, but they’re more common in minor.

You’re now familiar with the process of finding a chord’s root for Roman numeral analysis, but augmented sixth chords are not typically categorized by root. Instead, they are identified as chords containing the augmented sixth between le and fi [latex](\downarrow\hat6–\uparrow\hat4)[/latex] and further categorized according to the other notes in the chord, as shown above. The names “Italian,” “French,” and “German” are more colorful than historical, but each chord is based on this characteristic interval.

Example 2 shows the specific scale degrees of the augmented sixth interval and their resolution. Notice that both notes in this interval are : each one resolves to sol [latex](\hat5)[/latex] from a minor second away.

Augmented sixth chords are another strategy for creating harmonic intensification with chromaticism. They are mostly used as a predominant harmony (though they can serve an embellishing function as well—see Common-Tone Chords), and they lead directly to root-position V at a cadence point. They may intensify the push toward half and authentic cadences, and the V chord may have a seventh and/or include a [latex]\mathrm{cad.^6_4}[/latex]. Example 3 shows all three types in a simple cadential setting (authentic cadence versions). Note that you can expect that le [latex](\downarrow\hat6)[/latex] will be the bass for this chord, but fi [latex](\uparrow\hat4)[/latex] can be in any other voice. The Ger+6 is typically followed by a [latex]\mathrm{cad.^6_4}[/latex], which serves to offset the parallel perfect fifths that would have happened between G–D and F♯–C♯; the [latex]\mathrm{cad.^6_4}[/latex] may follow the other types as well. In a four-voice texture, the Fr+6 and Ger+6 don’t require doubling; in the It+6, which has only three unique pitches, the tonic is typically doubled because it is not an .

Example 3. All three types of augmented sixth chords in a cadential context.

Connection to the lament-bass progression

Example 4. Examples of replacing iv6 with an augmented sixth chord in lament-bass progressions.

Because augmented sixth chords are not root-based like you’re used to, you need another strategy to find them. Trying to determine the quality by stacking the chord in thirds would become confusing because it would contain a diminished third. The easiest method is simply to memorize that the bass motion le–sol [latex](\downarrow\hat6-\hat5)[/latex] can support this progression and if chords occur above those scale degrees and the chord with le [latex](\downarrow\hat6)[/latex] also contains fi [latex](\uparrow\hat4)[/latex], then you’ve likely identified an augmented sixth chord. From there, just determine the specific subtype (Italian, French, or German) by looking at the remaining chord members.

Example 5. Alternative spelling of the Ger+6 chord in major keys.

Ernesto Nazareth’s tango “Remando” (Example 7) uses a Ger+6 in m. 60 as part of the cadential progression. Notice the stepwise bass motion beginning in that measure, la–le–sol [latex](\hat6-\downarrow\hat6-\hat5)[/latex], as a technique to approach the augmented sixth chord by step in the bass. The melody of this dance features many accented passing tones, so the C♯ during the Ger+6 should be considered embellishing given that context. As is typical with the Ger+6, the following dominant chord is embellished with a [latex]\mathrm{cad.^6_4}[/latex]. 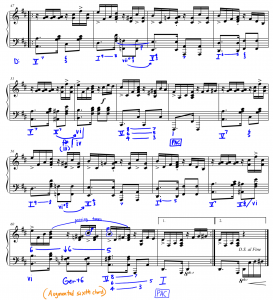 Intervals that are one half step larger than a perfect or major interval.

In tonal music, a note that has a tendency to move to a specific note in the following chord, usually a step up or down. Also called a "tendency tone."

The phrygian half cadence (PHC) is a special kind of cadential phrase ending that occurs only in minor and involves the progression iv6–V. It's called “phrygian” because of the half step that occurs when le (↓6̂) moves to sol (5̂) in the bass, a sound that’s similar to when ra (↓2̂) moves to do (1̂) in the phrygian mode.

A variety of harmonic progressions that harmonize a stepwise descending bass line from tonic to dominant. The simplest diatonic version uses the bass notes do–te–le–sol and is harmonized by the progression i–v⁶–iv⁶–V. Chromatic alternatives are common.