Ternary is a musical form consisting of three distinct sections. As with most musical forms, ternary involves large-scale repetition and so ternary form is typically defined as ABA because opening section (A) returns after the contrasting section in the middle (B).

Though it might seem logical, ternary form is not typically defined as being ABC. ABC is more often considered as part of the category because each section contains different music.

While the contents of each section can vary greatly concerning phrase and form, each section is commonly comprised of multiple phrases and very often those phrases combine together into a complete form (very often a binary form). A ternary form is considered to be (or composite) if one or more of its sections is comprised of a complete musical form. If a section does not contain a complete form, it can be called . In many compound ternary forms (like minuet & trio or scherzo & trio in particular), all sections contain complete forms (often rounded binary form). In compound ternary forms of the 19th century, however, the last A section is often shortened and is simple, not compound.

Example 2. Abstract diagram of a compound ternary form where all sections contain their own complete form.

Example 3. Hypothetical example of a compound ternary form where all sections contain their own complete forms. 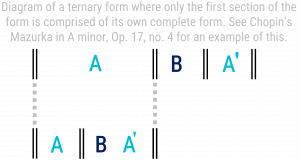 Example 4. Diagram of a ternary form where only the first section of the form is comprised of its own complete form. See Chopin’s Mazurka in A minor, Op. 17, no. 4 for an example of this.

Contrasting Characteristics of B

The second section of a ternary form, usually referred to as the B section, is expected to provide contrast with the A section that preceded it. This contrast may come from a variety of musical domains including key, mode, texture, time signature, rhythmic ideas, melodic ideas, range, instrumentation, register, and so on. The length of B, however, is expected to be generally proportional to that of A.

Stability of Each Section

In some genres (like the minuet & trio), the A and B sections contain a relatively similar level of stability, usually because they start and end in the same key and contain phrases that are . In other genres (arias in particular), the B section is often less stable than A. B‘s instability is largely due to starting and ending in different keys and a generally phrase-structural organization than A.

As with other forms, each section can be described in terms of being harmonically or .

Modulation Within a Section

If the ternary form contains a modulation within one of the main sections (A or B), it much more likely to occur in the B section of ternary forms found in arias but is not associated with dance forms like the minuet and trio. Modulation is possible within each section, but is very rare in the A section and should be considered atypical when found there.

Compound Ternary Form in a Dance Form (Chopin, Polonaise in A major, Op. 40, No. 1, polonaise)

An attribute of a musical form where no sections of music return. For example, a form with sections A B C. Similar motivic material may be present in different sections, but the sections would each be considered distinct. A piece that doesn't have any clear sections and seems like a continuous churning of musical ideas can also be described as through composed.

A type of ternary form where at least one of the form's parts (A, B, or the second A section) is comprised of its own complete form (typically a binary form). The term "compound" can also be used to clarify that a single section contains a complete form. Compare with simple ternary form.

A ternary form whose sections are each made up of one or more phrases but not complete forms. The term "simple" can also be used to clarify that a single section does not contain a complete form. Compare with compound ternary form.

A phrase or module is harmonically open when it ends on a harmony other than tonic.

A phrase or module is harmonically closed when it ends with tonic harmony (I in root position).