The terms and refer to ways composers play with the expected length of a phrase.

What does “expected length” mean?

In this chapter, we offer an overview of several techniques for phrase expansion and contraction. This isn’t an exhaustive list, but it covers several of the more common techniques. The terminology concerning expansion and contraction techniques can quickly become overwhelming. What’s most important is to be able to recognize when a phrase is longer or shorter than expected and to be able to describe what’s creating the difference in length.

The four techniques we discuss below—, , , and —all occur within a phrase: after the phrase’s beginning, but before its cadence. Often, composers use these techniques in combination; in fact, it’s relatively rare to find a phrase that’s expanded using only one technique.

Sometimes when a composer repeats material, the  creates extra length.

Example 1 shows an exact repetition of a motive within a unit that creates extra length: a four-measure is followed by an expanded five-measure . The extra length results from a repeated within a unit.

Example 2 shows a varied repetition in which a whole unit is repeated to add extra length: a four-measure is followed by a five-measure . The continuation begins with a that expands it from the expected four measures to five.

Sometimes composers will lengthen a harmony or melody by increasing its duration so that it lasts longer than expected. When that happens, we say that the unit that contains the harmony or melody has been . In Example 3, a four-measure is followed by a five-measure . The continuation’s is stretched when a [latex]\mathrm{I}^6[/latex] chord and the cadential dominant (embellished by a [latex]\mathrm{Ger}^6[/latex] and a cadential [latex]^6_4[/latex]) each last for a full measure as opposed to both occurring within a single measure.

Coined by Janet Schmalfeldt (1989), the one-more-time technique involves three steps: 1) the music tries to cadence, 2) the attempted cadence is evaded, and 3) the music retries the cadence. The re-tried cadence often uses the same material, such that it feels like the music is “backing up,” but it may also retry the cadence with different cadential material.

Example 5 shows a detour: the sentence’s continuation is repeated. We realize the repetition is getting “off track” when the motive in the cadential idea (m. 19) is repeated (m. 20), which did not happen in the analogous place before (m. 15). A highly contrasting two-measure passage emerges (mm. 21–22) that leads to a return of material (mm. 23–26) similar to the cadential idea in mm. 19–20, now stretched.

Example 6 shows a reroute: a four-measure is followed by a six-measure expanded . The consequent begins with the same as the antecedent, but its moves in a markedly different direction, one that doesn’t lead to a cadence. A new cadential idea is needed to bring the phrase to a .

Although and alternative paths both involve cadences, they are very different techniques, as explained below:

When composers add length outside of a phrase, they may add measures before the beginning () or after the cadence (). In diagrams, we indicate external expansions using dashed arcs or brackets.

A occurs before the beginning of a phrase, usually taking the form of an introduction. A prefix can be small, but it may also be large, such as when a composer begins a symphony with a slow introduction. Example 7 shows a small prefix. As is very common with songs, this opens with an instrumental introduction before the singer enters—that is, before the phrase beginningg. Note also that this phrase includes a variant on the typical . Instead of mi-fa-sol-do ([latex]\hat{3}-\hat{4}-\hat{5}-\hat{1}[/latex]), Chaminade writes di-re-sol-do ([latex]\uparrow\hat{1}-\hat{2}-\hat{5}-\hat{1}[/latex]) (mm. 8–11).

A suffix occurs after a phrase has cadenced. The terms in Example 8 are flexibly used to describe different types of suffix. While Example 8 provides guidelines for their use, what one person calls a , another might choose to call a . It’s more important to recognize that a given suffix adds length outside the bounds of a phrase than to worry about which term is most appropriate.

Example 9 shows the end of a lengthy . After the perfect authentic cadence that ends the , a two-measure post-cadential extension prolongs the final tonic via arpeggiation.[1]

In Example 10, a lengthy phrase ends the exposition of the piano sonata with a PAC in A♭ major at m. 41. The cadence is followed by a codetta: notice that it features a repeated two-measure unit harmonized with the cadential bass line fi-sol-do ([latex]\uparrow\hat{4}-\hat{5}-\hat{1}[/latex]).

Example 11 features the longest kind of suffix: a coda. After the introduction returns (4:52) and then is varied (5:03), an elided PAC ends the piece proper (5:32). The coda (also at 5:32) presents an energetic celebration of the piece’s closure, featuring a fast version of a previously-heard theme with several phrases. 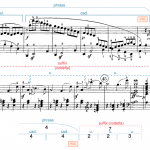 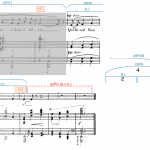 Contractions occur less frequently than expansions. A occurs when a phrase is shorter than we might expect it to be.

In Example 12, a four-measure is followed by a three-measure continuation. Given the length of the compound basic idea, we might have expected the continuation to be four measures long to create proportional balance. As you listen, notice how the cadence feels abrupt, a feeling that usually accompanies contraction.

A technique of internal phrase expansion. Sometimes a composer repeats material to create extra length in a phrase. Such repetitions may be exact or varied.

A technique of internal phrase expansion. It occurs when a composer lengthens a harmony or melody by increasing its duration so that it lasts longer than expected. When that happens, we say that the unit that contains the harmony or melody has been stretched.

A technique of internal phrase expansion. Coined by Janet Schmalfeldt, the technique involves three steps: (1) the music tries to cadence, (2) the attempted cadence is evaded, and (3) the music retries the cadence.

A technique of internal phrase expansion. It occurs when new material causes a phrase to deviate from its expected trajectory toward the cadence. These deviations may be permanent ("reroutes") or temporary ("detours").

A type of external expansion that occurs after the end of a phrase. There are three terms commonly used to describe suffixes, ranging in size from smaller to larger: post-cadential extension, codetta, and coda.

A type of suffix (external expansion). Post-cadential extensions are usually short, they often occur at the ends of phrases within a section, and they typically prolong the final chord of the cadence or re-state the two chords that created the cadence.

A type of suffix (external expansion). Codettas are usually medium length (for example, between 4 and 8 measures), they often occur at the end of a section within a piece, and they often feature repeated units. They may or may not contain a full phrase.

A large suffix section occurring at the end of a work (or end of a movement within a multi-movement work), after the PAC that ends the piece’s core sections.

Contraction refers to the process of making a phrase shorter than expected. It always occurs within a phrase.

A relatively complete musical thought that exhibits trajectory toward a goal (often a cadence).

Phrases that are "archetypal" or that follow an archetype are related to the sentence, the period, or one of the hybrid phrase-level forms.

Making a phrase last longer than we expect by lengthening it after it begins, but before it cadences.

Lengthening a phrase by adding extra material to it either before it begins ("prefix") or after it cadences ("suffix").

A phrase consisting of a basic idea followed by a contrasting idea that ends with a weak cadence.

A phrase consisting of a basic idea followed by a contrasting idea that ends with a strong cadence. It usually forms the second half of a phrase-level form.

A regularly recurring unit of music that's smaller than an idea, and which is typically transformed across a work. The word "motive" usually refers to pitch material, but other kinds of motives such as rhythmic or contour also exist.

A compound basic idea (c.b.i.) is an antecedent without a cadence. It consists of a basic idea followed by a contrasting idea.

A pattern that is repeated and transposed by some consistent interval. A sequence may occur in the melody, the harmony, or both.

One of the three common ending types. Its distinguishing characteristic is its bass line: mi–fa–sol–do (3̂–4̂–5̂–1̂), which may be elaborated with chromaticism.

A type of alternative path. A detour creates a temporary deviation from a phrase's expected trajectory toward a cadence. Detours are initiated by a diversion onto the detour and they end with a resumption of rhetoric from earlier in the phrase.

A type of alternative path that involves a permanent change of a phrase's trajectory toward the cadence. Reroutes are initiated by a diversion.

Basic ideas are short units that are typically associated with beginnings. They don't usually end with cadences, and they often establish tonic. They are the first units we hear in a presentation, an antecedent, a consequent, and a compound basic idea.

A V–I cadence that ends with do (1̂) in the melody. Both harmonies must be in root position.

A coda is a song-ending section that presents new material. Like outros, codas exhibit closing rhetoric.