In Rhythmic and Rest Values, we discussed the different rhythmic values of and . Musicians organize rhythmic values into various , which are—broadly speaking—formed as the result of recurrent patterns of accents in musical performances.

Listen to the following performance by the contemporary musical group Postmodern Jukebox ( Example 1). They are performing a cover of the song “Wannabe” by the Spice Girls (originally released in 1996). Beginning at 0:11, it is easy to tap or clap along to this recording. What you are tapping along to is called a —a pulse in music that regularly recurs.

Example 1. A cover of “Wannabe” performed by Postmodern Jukebox; listen starting at 0:11.

Example 1 is in a : a meter in which the beat divides into two, and then further subdivides into four. You can feel this yourself by tapping your beat twice as fast; you might also think of this as dividing your beat into two smaller beats.

Let’s listen to examples of simple duple, simple triple, and simple quadruple meters. A meter contains two beats, each of which divides into two (and further subdivides into four). “The Stars and Stripes Forever” (1896), written by John Philip Sousa, is in a simple duple meter.

Listen to Example 2, and tap along, feeling how the beats group into sets of two:

Example 2. “The Stars and Stripes Forever” played by the Dallas Winds.

A meter contains three beats, each of which divides into two (and further subdivides into four). Wolfgang Amadeus Mozart’s “Minuet in F major,” K.2 (1774) is in a simple triple meter. Listen to Example 3, and tap along, feeling how the beats group into sets of three:

Finally, a meter contains four beats, each of which divides into two (and further subdivides into four). The song “Cake” (2017) by Flo Rida is in a simple quadruple meter. Listen to Example 4 starting at 0:45 and tap along, feeling how the beats group into sets of four:

As you can hear and feel (by tapping along), musical compositions in a wide variety of styles are governed by meter. You might practice identifying the meters of some of your favorite songs or musical compositions as simple duple, simple triple, or simple quadruple; listening carefully and tapping along is the best way to do this. Note that simple quadruple meters feel similar to simple duple meters, since four beats can be divided into two groups of two beats. It may not always be immediately apparent if a work is in a simple duple or simple quadruple meter by listening alone.

If you have ever sung in a choir or played an instrument in a band or orchestra, then you have likely had experience with a . Conductors have many jobs. One of these jobs is to provide conducting patterns for the musicians in their choir, band, or orchestra. Conducting patterns serve two main purposes: first, they establish a tempo, and second, they establish a meter. 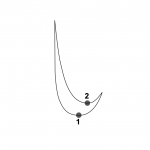 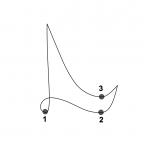 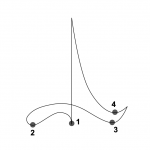 You can practice these conducting patterns while listening to Example 2 (duple), Example 3 (triple), and Example 4 (quadruple) above.

In simple meters, (also called meter signatures) express two things: 1) how many beats are contained in each measure, and 2) the beat unit (which note value gets the beat). Time signatures are expressed by two numbers, one above the other, placed after the clef (Example 10).

In simple meters, the top number is always 2, 3, or 4, corresponding to duple, triple, or quadruple beat patterns. The bottom number is usually one of the following:

Counting rhythms aloud is important for musical performance; as a singer or instrumentalist, you must be able to perform rhythms that are written in Western musical notation. Conducting while counting rhythms is highly recommended and will help you to keep a steady tempo. Please note that your instructor may employ a different counting system. Open Music Theory privileges American traditional counting, but this is not the only method.

Example 11 shows a rhythm in a [latex]\mathbf{^4_4}[/latex] time signature, which is a simple quadruple meter. This time signature means that there are four beats per measure (the top 4) and that the quarter note gets the beat (the bottom 4).

Like with notes that last for two or more beats, beats that are not articulated because of rests, ties, and dots are also not counted out loud. These beats are usually written in parentheses, as shown in Example 13:

Example 13. Beats that are not counted out loud are put in parentheses.

When an example begins with a pickup note (), your count will not begin on “1,” as shown in Example 14. An anacrusis is counted as the last note(s) of an imaginary measure. When a work begins with an anacrusis, the last measure is usually shortened by the length of the anacrusis. This is demonstrated in Example 14: the anacrusis is one quarter note in length, so the last measure is only three beats long (i.e., it is missing one quarter note).

In simple meters with other beat units (shown in the bottom number of the time signature), the same counting patterns are used for the beats and subdivisions, but they correspond to different note values. Example 15 shows a rhythm with a [latex]\mathbf{^4_4}[/latex] time signature, followed by the same rhythms with different beat units. Each of these rhythms sounds the same and is counted the same. They are also all considered simple quadruple meters. The difference in each example is the bottom number of the time signature—which note gets the beat unit (quarter, half, eighth, or sixteenth).

Note that in vocal music, beaming is sometimes only used to connect notes sung on the same syllable. If you are accustomed to music without beaming, you may need to pay special attention to beaming conventions until you have mastered them. In the top staff of Example 17, the eighth notes are not grouped with beams, making it difficult to see where beats 2 and 3 in the triple meter begin. The bottom staff shows that if we re-notate the rhythm so that the notes that fall within the same beat are grouped together with a beam, it makes the music much easier to read. Note that these two rhythms sound the same, even though they are beamed differently. The ability to group events according to a hierarchy is an important part of human perception, which is why beaming helps us visually parse notated musical rhythms—the metrical structure provides a hierarchy that we show using notational tools like beaming.

Example 18 shows several different note values beamed together to show the beat unit. The first line does not require beams because quarter notes are never beamed, but all subsequent lines do need beams to clarify beats.

Partial beams can be used for mixed rhythmic groupings, as shown in Example 21. Sometimes these beaming conventions look strange to students who have had less experience with reading beamed music. If this is the case, you will want to pay special attention to how the notes in Example 21 are beamed.

Example 21. Partial beams are used for some mixed rhythmic groupings.

Rests that last for multiple full measures are sometimes notated as seen in Example 22. This example indicates that the musician is to rest for a duration of four full measures.

A Note on Ties

We have already encountered ties that can be used to extend a note over a measure line. But ties can also be used like beams to clarify the metrical structure within a measure. In the first measure of Example 23, beat 2 begins in the middle of the eighth note, making it difficult to see the metrical structure. Breaking the eighth note into two sixteenth notes connected by a tie, as shown in the second measure, clearly shows the beginning of beat 2.

A pulse in music to which one can tap or clap along. A grouped hierarchy of beats forms a meter.

A meter that divides the beat into two parts.

A meter with two beats per measure.

A meter with three beats per measure.

A meter with four beats per measure.

Created by bar lines, a measure (or bar) is equivalent to one beat grouping.

An indication of meter in Western music notation, often made up of two numbers stacked vertically.

The horizontal lines that connect certain groups of notes together.

A curved line placed at the end of a stem. Each flag added to a stemmed note represents the reduction of the note value by half. For example, the symbol for an eighth note is like a quarter note plus a flag; the eighth note is one-half the value of the quarter note.

A musical sound that has both a pitch and a rhythmic component; the symbol may include a stem, beam, and/or flag.

A measured silence in a piece of music.

A recurring pattern of accents that occur over time. Meters are indicated in music notation with a time signature.

A meter with two beats, each of which divides into two.

A meter with three beats, each of which divides into two.

A meter with four beats, each of which divides into two.

The director of an ensemble.

Beat 1 of a measure, which is conducted with a downward motion.

The last beat of a measure which is conducted with an upward motion.

Notes on an upbeat that lead into the first downbeat of a phrase.