Modal mixture (or borrowing) is the harmonic technique of mixing the notes from the parallel major and natural-minor modes (e.g., C major and C minor). This results in changing the chord qualities and/or melodic “color” to achieve expressive effects not available in the main scale itself. In the majority of cases, this occurs in major-key pieces where notes from the parallel minor are borrowed. Most of this chapter reflects that norm. The next two examples are a brief review of parallel minor scales and their associated solfege and scale degrees. Notice the three differences between the scales: mi/me [latex](\hat{3}/\downarrow\hat{3})[/latex], la/le [latex](\hat{6}/\downarrow\hat{6}[/latex]), and ti/te [latex](\hat{7}/\downarrow\hat{7})[/latex].

Example 1. Comparison of parallel major and minor scales and their solfege.

Example 2. Comparison of parallel major and minor scales and their scale degrees.

While these changes may only be reflected in a single melodic line to add color to a specific moment, quite often they have a pronounced harmonic effect. By borrowing notes from the parallel scale, the chord qualities change as shown below in the next two examples:

Chords with le [latex](\downarrow\hat{6})[/latex] only

As you might expect not all of these modal mixture possibilities show up with equal frequency. Cadential predominant chords are common targets and the examples below appear with some frequency in cadential progressions, each of which only borrow le [latex](\downarrow\hat{6})[/latex] from the parallel minor key.

Borrowing me [latex](\downarrow\hat{3})[/latex] and te [latex](\downarrow\hat{7})[/latex] are also common. Notice that when the root of the chord is changed from its original position in the scale, an accidental is placed in front of the Roman numeral to signifiy this change. These accidentals are not to read literally as flat or sharp, however. They are used to mean lower [latex](\flat)[/latex] and raise [latex](\sharp)[/latex] instead. So, the Roman numeral [latex]\flat\mathrm{III}[/latex] means a major triad built on the lowered 3rd scale degree.

Using modal mixture is as simple as lowering a few notes but it is most common for chords to be fully borrowed from the minor scale not just partially. For example, only using le [latex](\downarrow\hat{6})[/latex] when a chord also uses mi [latex](\hat{3})[/latex] is uncommon. Is it also common that once modal mixture enters, it stays until the harmony moves on to another harmonic category. So, if there are two predominant chords and the first one uses modal mixture, the second chord is very likely to include it as well. The modal mixture is likely to stop once the predominant area has moved on to the dominant harmonic category, but not always.

Example 8. Comparison of a diatonic progression and the same progression with modal mixture in the predominant area.

The one common situation where modal mixture occurs in minor keys is called a picardy third. It involves ending a major key piece or movement with a major tonic chord. According to Oxford Music Online, it is unknown where the name picardy comes from, but the technique was quite common in the 16th and 17th centuries but faded in popularity in the later 18th and 19th centuries.

While modal mixture may only involve a brief melodic change or involve one or more chords, it is also used in extended tonicizations and can be used to facilitate a modulation to a distantly related key. The example below shows a modulation between two distantly related keys (B[latex]\flat[/latex] major and D[latex]\flat[/latex] major) using a chromatic pivot chord to smooth out what could be a rather abrupt modulation. The subdominant chord uses le [latex](\downarrow\hat{6})[/latex]instead of the diatonic la [latex](\hat{6})[/latex] which makes the chord sound like [latex]\mathrm{iv}[/latex] in the first key by [latex]\mathrm{ii}[/latex] in the second key.

Example 10. A progression that uses modal mixture to modulate to distantly related key.

Example 11 shows a simple harmonic progression that borrows [latex]\downarrow\hat{6}[/latex] from the parallel minor key which produces modal mixture. Notice the change in quality from [latex]\mathrm{ii^4_3}[/latex] to [latex]\mathrm{ii}^{Ø}\begin{smallmatrix}4\\3\end{smallmatrix}[/latex].

Example 12 is a more extensive usage of modal mixture. Modal mixture is introduced at the third system and continues until the conclusion of the phrase at the bottom of the page. This results in a modulation from E major to its parallel minor, E minor. Notice in particular the dramatic effect of starting a phrase in a major key and ending in a minor key with same tonic. 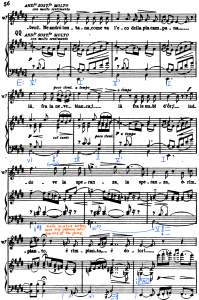