In The Phrase, Archetypes and Unique Forms, we looked at two phrase-level formal : the and the .

A occurs when the beginning of one archetype is paired with the ending from another archetype. In Example 1, an antecedent is followed by a continuation.

A is an antecedent without a cadence, as seen in Example 2.[1]

The three beginnings that appear in hybrid phrase-level forms are antecedent, compound basic idea, and presentation. Example 3 provides a summary of the characteristics that differentiate each of these beginnings.

A ending harmonizes a particular bass pattern (demonstrated in Example 4).[2]

The clearest cadential endings are four measures long with one bass note per measure.

The three endings that appear in hybrid phrase-level forms are consequent, continuation, and cadential. Example 5 provides a summary of the characteristics that differentiate each of these endings.

The three possible beginnings and three possible endings are shown in Example 6. While any beginning on the left could be paired with any ending on the right, Example 7 shows that there are some pairings that are more common than others.

Below, we provide examples for all hybrids in the “slightly less common” and “occasional” categories (Examples 8–12). We already provided examples of the period and sentence in The Phrase, Archetypes, and Unique Forms.

The examples we provide in this chapter are all eight-measure archetypes, but as we show in the next chapter, these forms can be any length.

Example 6. Possible beginnings and endings. Any beginning on the left can theoretically pair with any ending on the right.

Example 7. Pairings of beginnings and endings sorted by degree of commonality. 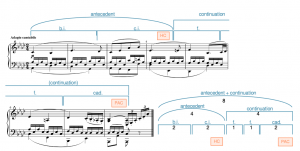 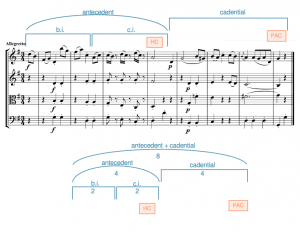 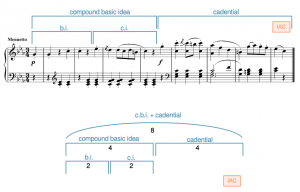 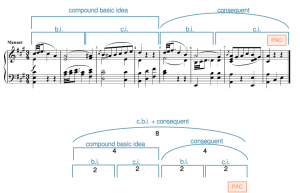 With so many possibilities, it might seem overwhelming to try to sort through the various possibilities. Example 13 offers a suggested listening strategy that can help determine what kind of beginning and ending you’re hearing.

A phrase form that combines aspects of the sentence and the period into one phrase-level form.

A phrase consisting of a basic idea followed by a contrasting idea that ends with a weak cadence.

A compound basic idea (c.b.i.) is an antecedent without a cadence. It consists of a basic idea followed by a contrasting idea.

A phrase consisting of a basic idea followed by a contrasting idea that ends with a strong cadence. It usually forms the second half of a phrase-level form.

One of the three common ending types. Its distinguishing characteristic is its bass line: mi–fa–sol–do (3̂–4̂–5̂–1̂), which may be elaborated with chromaticism.

Phrases that are "archetypal" or that follow an archetype are related to the sentence, the period, or one of the hybrid phrase-level forms.

A special kind of phrase consisting of a presentation and a continuation.

A unit in some phrase-level forms that is one level smaller than a phrase, but one level larger than an idea.

A relatively complete musical thought that exhibits trajectory toward a goal (often a cadence).

Basic ideas are short units that are typically associated with beginnings. They don't usually end with cadences, and they often establish tonic. They are the first units we hear in a presentation, an antecedent, a consequent, and a compound basic idea.

Making unit sizes smaller than the previously established size. For example, if units had previously been two measures long, fragments might be one measure long.

A kind of inconclusive cadence that occurs when a phrase ends on V. Occasionally, particularly in Romantic music, the final chord of a half cadence will be V⁷.