The Neapolitan sixth [latex](\flat\mathrm{II}^{6})[/latex] is a chromatic predominant chord. It is a major triad built on ra [latex](\downarrow\hat{2})[/latex] and is typically found in first inversion.

While the name “Neapolitan” is a reference to the Italian city of Naples (Napoli), the historical connection is quite shallow as the chord was used in many other European cities in the 18th and 19th centuries.

As mentioend above, the Neapolitan mostly appears in a small number of stock harmonic progressions. Less often, however, the Neapolitan can be found in root position [latex](\flat\mathrm{II})[/latex] and it may lead to an inverted dominant instead of the root-position version [latex](\mathrm{V^4_2}[/latex] in particular).

While the Neapolitan is most often used as a single chord within a cadential progression, it—like any other chord—can be prolonged through an extended toncization or even used as a key area.

Example 4 shows a relatively straight-forward example of a [latex]\mathrm{\flat II^6}[/latex] chord occuring in the context of a cadential progression. Note that the harmoic rhythm is a half-note long, so think of beats 3 and 4 in measure 6 as part of a single harmony. 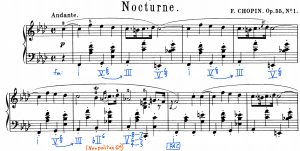