We’ve seen that involves making a non-tonic chord sound like a temporary tonic. In this chapter, we discuss , which, in contrast to the temporary nature of tonicization, involves a longer-term change of tonic. Sometimes people refer to modulation as a “change of key.”

There are two basic ways a composer can introduce a new key: they can make the key change abrupt (Example 1), or they can be more subtle about it (Example 2). Two pieces of advice are helpful for identifying modulations:

Direct modulations (these are abrupt)

Pivot chord modulations (these are subtle)

A composer can use a variety of techniques to make a modulation more subtle, but one of the more common ways to do it is through the use of a pivot chord. A pivot chord is a single chord that is in (i.e., that belongs to) both the home key and the new key. Example 2 shows that we analyze a pivot chord using a special symbol where the upper Roman numeral labels the chord in the old key and the lower Roman numeral labels the chord in the new key. In measure 6 of Example 2, we would say “iv7 becomes ii7.” There’s no single method that always works to find a pivot, but one strategy that’s helpful is to analyze in the old key until it stops making sense, then back up a chord and try analyzing that as your pivot. If that chord doesn’t work as a pivot either, try backing up one more chord.

Sometimes multiple chords could serve as pivots. In such cases, the best chords are ones where the upper and lower Roman numerals are both predominant chords. That’s because V will usually appear shortly after the pivot, and having a predominant in both positions for your pivot chord label suggests that we’re on the way to V in both the old and new keys. Your second best option would be a tonic chord in the old key becoming a predominant in the new key (I becomes IV). Since a tonic chord can go directly to V, the analysis here still makes functional sense. Poor pivot chord analyses are usually ones that involve the dominant. An analysis such as “V becomes I,” for example, suggests that the same chord is simultaneously unstable (V) and very stable (I), which isn’t how we’re likely to hear it.

While a composer may modulate anywhere, some modulations are more common than others because of the number of chords the two keys share. Key signatures within one accidental of one another (e.g., C major and G major) are considered closely related keys, sharing many common chords. To find all of the closely related keys for a given home key, do the following. You may find it useful to reference the circle of fifths (Example 3).

If you were to do this with F major as a starting point, you should end up with something like Example 4. Notice that the keys will always correspond to every major or minor triad in the home key’s universe of Roman numerals (so, in major: I, ii, iii, IV, V, and vi; in minor: i, III, iv, v, VI, and VII). This is a good way to check your work.

While it’s possible to modulate to any key, certain keys are much more common than others:

If you’re writing a modulating phrase that uses pivot chords, you’ll need to choose a pivot chord, then determine an appropriate progression.

Remember that the best pivots are ones that are predominants in both keys. 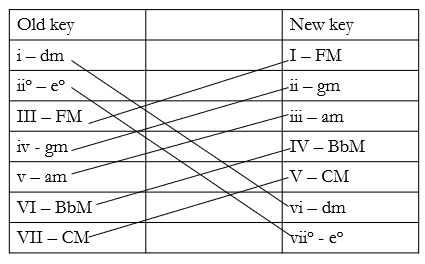 Example 5. Identifying pivots to modulate from Dm to F.

Our ears tend to need time to adjust to hearing a new key. If you want your new key to sound firmly established, it’s therefore best not to cadence too quickly after your pivot. A good strategy can be to use deceptive motion to avoid a cadence in the new key, and then to retry and successfully achieve a cadence afterward (Example 6). Notice that Example 6 begins by establishing the home key with a standard tonic expansion progression.

Tonicization and modulation can be viewed as two poles on a spectrum based on the length of the passage in question and the strength with which a new key is established (Example 7). Modulations are longer and stronger than tonicization. What does “stronger” mean here? The clearest modulations are those in which the new key is established with the cadence, and then the passage continues in the new key after the cadence. Weaker modulations might only establish the new key with the cadence, then go right back to the home key. Sometimes people will simply hear a passage differently: some people’s ears seem to more willingly accept key changes than others. In your analysis, you should be able to represent your hearing of a given passage and explain why you hear it that way, and you should also be able to understand why someone else might hear it differently.

Example 7. Spectrum between tonicization and modulation.

Often, analysts realize an extended tonicization is taking place when one of two things happens:

A chord used to modulate between two keys that is diatonic in both.

The same as modulation, a change of tonic.

1. A scale, mode, or collection that follows the pattern of whole and half steps W–W–H–W–W–W–H, or any rotation of that pattern.
2. Belonging to the local key (as opposed to "chromatic").