This chapter goes through the composition of some new twelve-tone music. It can be useful to follow someone else’s process closely in this way. It is certainly useful to try something similar yourself.

So far, we’ve seen some rows and serial properties in the abstract, and their usage in some existing pieces. Now let’s complement that by writing a new piece. It’s worth reiterating that (like any other musical style or technique) there are infinitely many ways of approaching composition with twelve-tone rows, and so this can only be an example and not representative—indeed no more than a single analysis can be. All the same, an example of writing with rows will be a helpful illustration of how we can navigate between theory and practice. We can aspire to something like Béla Bartók’s marvelous Mikrokosmos collection: short pieces with a clear compositional “brief” that are also rather interesting as “real” pieces.

Here, we’ll start by choosing and examining rows, then go on to write at least the start of some passages that vary in how they approach the same material, especially in terms of how relatively “free” or “strict” they are in their use of serial processes.

Let’s start by choosing some rows to work with. Among the many possible motivations for choosing rows, I’m inclined to seek out those that:

For me, the “all-trichord” rows are a great fit for these criteria. Alan Marsden (2012, 162) defines these as “12-note series which, when treated as circular, [contain] in the 12 sets of 3 consecutive pitch classes all the 12 possible classes of trichord.”[1]
Marsden has demonstrated that there are exactly four distinct forms of this row:

Here they are as twelve-tone rows starting on C, and also with the corresponding trichords given and labeled below:

Given that all standard tone rows feature all twelve pitches and the “all-interval” rows featuring all eleven intervals are also familiar and common, you could view the all-trichord rows as a logical extension of these familiar row properties. They are certainly useful insofar as our goal in composing with twelve tones is to pursue maximal variance.

Perhaps most compellingly of all, Marsden concludes that he “never did find a convincing way to make use of this in composition” (2012, 163). To some composers, that kind of comment is irresistible.

Following are several example compositions and discussions of how a row can be used to generate the pitch material for a musical composition.

Let’s begin with the least strict approach. Here we’ll consider the use of these rows and the emphasis on overlapping trichords as enough of a constraint, leaving to free creative choice all other matters including:

That starting premise could be realized in any number of different ways. Here’s an example opening for solo viola that moves from the first trichord to the second (the two that are common to the start of all four rows as set out above):

Many composers—serial and otherwise—find it helpful to set initial constraints in this way, partly because it can give you license to approach the more detailed matters freely. The restrictions leave open a wide range of possibilities for how to proceed. For instance, we might like to create an overall contour that works up to a high point and then comes back down from there. Alternatively, we might prefer a static and demonstrably constrained passage. It’s wide open.

We could also approach these overlapping trichords in a more vigorous, rhythmic way. For instance, we could have a kind of minimalist moto perpetuo style, insistently repeating each trichord numerous times before moving on to the next one. Let’s start with a continuous stream of notes, repeating our trichord in order (so with pitches 1-2-3-1-2-3- …). To move on to the next trichord, we can simply take the second pitch as the start of a new cycle for pitches 2-3-4. So if we’re repeating pitches 1-2-3-, then at some point we have a 1-2-3-1- and the following 2 marks the beginning of a 2-3-4- cycle.

We can make this change after completing any number of 3-note cycles plus 1 note: that is, after 4 notes (one cycle +1), or 7 (two cycles), 10, 13, 16, and so on. This should get us thinking about rhythm and meter. Say we put this predominantly 3-grouping pattern into a duple meter like [latex]\mathbf{^2_2}[/latex]. That would lend the music an attractive and familiar 3-against-4 metrical dissonance. Whatever meter we choose, we’ll have to make adjustments for some of the cycle lengths: some will “fit” with the meter, and others will disrupt it. For instance, in our duple meter, the 4 cycle could be “one beat” (e.g., four eighth notes as one beat in [latex]\mathbf{^2_2}[/latex]) and 16 could be 2 measures (4 x 4 beats). By contrast, the 10 cycle means breaking up the meter a bit (e.g., with a [latex]\mathbf{^5_4}[/latex]), and the 7 stretches down to another, lower metrical level ([latex]\mathbf{^7_8}[/latex]).

Here’s a short passage realizing some of these ideas for string quartet, with each cycle now clearly marked both by viola and cello pizzicato, and by moving the pattern from one violin to the other (which also gives each player a welcome break!). Most of the cycles are 16 notes long, but there are some shorter ones too to break up the flow, and to dwell on some of the trichords more than others. Again, the choice of which is free. 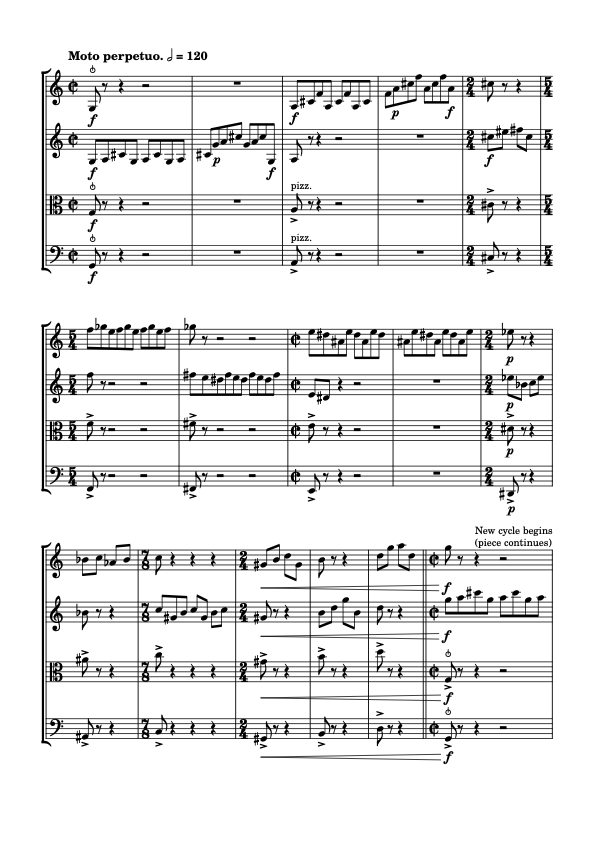 Finally, let’s explore a stricter approach, without note repetitions, and with more than one row at a time. Let’s do this in the context of the classic strict polyphonic form: the fugue.[2] We could make one of the rows directly into a twelve-tone subject and take a countersubject that’s hexachord-combinatorial with this subject. The subject and countersubject are going to be played together (by definition), so hexachordal combinatoriality will ensure that we don’t repeat a pitch within the half-cycle.

We could also ensure that pitches aren’t repeated even when third and fourth voices enter—so, at the trichord level. Our rows aren’t trichord-combinatorial, but given our existing hexachord-combinatorial pair, we can get there by swapping the trichords of each row to make a new pair that, combined with the existing two, will see all twelve pitches in each set of trichords.

More precisely, simply swapping trichords would break the ordering of these row and mean losing the defining “all-trichord” property, though there’s still a way we can achieve the same thing while retaining a structure consistent with the original row. Note that “swapping trichords of each half” means taking trichords 1,2,3,4 and ending up with 2,1,4,3. To get from one to the other while retaining the same ordering, we can retrograde and rotate by a half-cycle. So, for instance, for an ascending chromatic scale row, we’d get this:

So, applying this process to the initial row and a hexachord-combinatorial pair, we can get a solution like the following:

Note that there’s no repetition of a pitch within:

This property is true by definition for any row, so it’s worth keeping in the compositional box of tricks.

It’s all very well deciding that we’re going to use combinatorial pairs, but we need to know that at least one of our rows actually has this property. In fact, they all do, though not equally: each row has at least some rotations that are inversion-combinatorial (remember that rotating these rows retains the all-important all-trichord property!), though rows 3 and 4 have slightly more such rotations than 1 and 2. Here’s the list for row 3, for instance:

And here’s a demonstration of the rotation starting on the second pitch means we can rotate around the trichords and still have I-combinatoriality (i.e., rotations 1, 4, 7, 10 from the table): 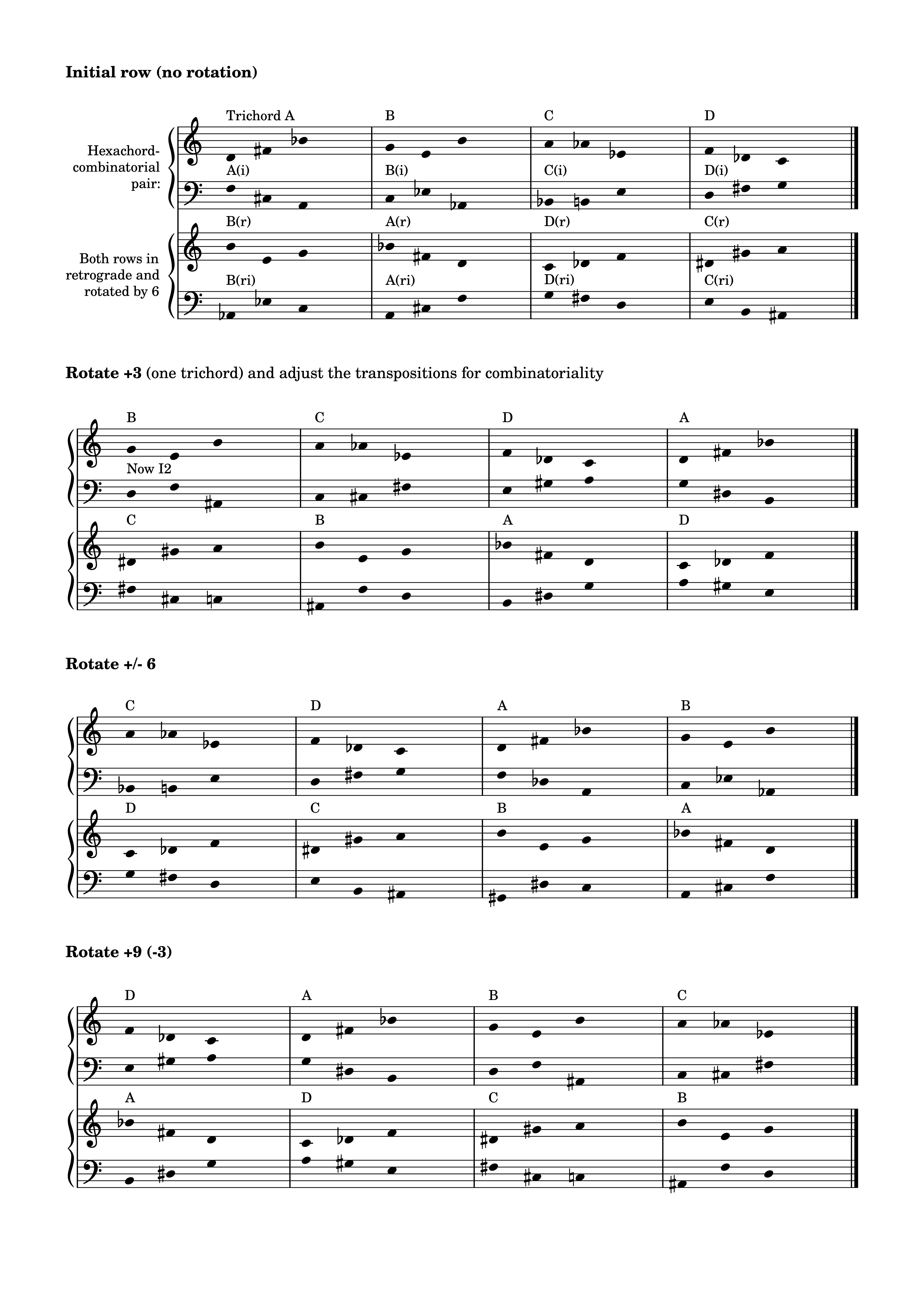 We could start on any one of those trichords/rotations for this property. Of those options, let’s start on the second pitch, partly because it gives us the augmented triad, which seems like a good place from which to launch: a symmetrical trichord for a fugato with inverse-related subject and countersubject.

All that remains is to write the music! Let’s keep the rows separate with different parts, points of entry and rhythms. We begin with an exposition (mm. 1–8) that involves:

After the exposition, we explore the trichord rotation property discussed above: the cello plays the same four trichords in a loop, with the rows overlapping by one trichord each time. This leads to the equivalent rotations of the row in other parts (as shown in the row chart above). Additionally, because the cello has kept the same pitches, the other parts also have to transpose to new pitch levels to preserve the combinatoriality (unlike in the chart above where the top staff stays on the same pitch level and the others adjust).

As is typical (indeed almost inevitable) for a fugato, the passage builds in density. Matching that, this realization also increases the rate of change both through a poco a poco accelerando and by iteratively shortening the phrase spans with this scheme for dropping rests:

Finally, after rotating around the four trichords, we rotate back one pitch to the original rotation of the row that starts with the [0, 2, 6, 10] pattern common to the “start” of all four rows. This rotation certainly changes things. We’ve been stuck in a particular segmentation of the row up to this point, and thus an emphasis on only four of the twelve trichords. Rotating by one gets us to another set of four. If any of the rows supported hexachordal combinatoriality for all three successive rotations (i.e., the last set of four), then we might have built the passage around the three equally, but none of these rows have that property, so instead we focus on one and use the moment of changing to the other one as a sign that the section is ending. Again, this is simply one approach among many possibilities.

Putting it all together

So there you have it: various possible ways of working with these rows. Next steps might involve picking one of these to extend into a full piece, or else combining the three (and perhaps other sections) into a collection of short movements, perhaps etudes.

To conclude then, here is one realization of this piece. Here we start with the free fantasia (now called simply “solo”), followed by the fugato and moto perpetuo, and end with a short section closer to the the more relaxed spirit of the opening. Again, there is a wide range of options at every turn, from the choice of a “free” or “strict” approach to the actual implementation in practice.

A collection of three notes.