One way to understand is as a hierarchical grouping of units. Example 1 shows that a piece contains movements, movements contain sections, sections contain themes, themes contain phrases, and so on.

Although the diagram in Example 1 looks quite simple, the relationships between the levels are a little more complicated in reality. For instance, sometimes two levels are collapsed into one: a single phrase might also serve as the section for a work, so it may not always be worthwhile to distinguish between each level. It’s best to think of Example 1 as a guide and not as something that strictly defines formal levels.

This chapter, along with the three that follow it, are focused on , or the various ways in which a phrase may be constructed of , , and . While phrases always contain ideas and motives, they may also contain subphrases, something to which we will return later. 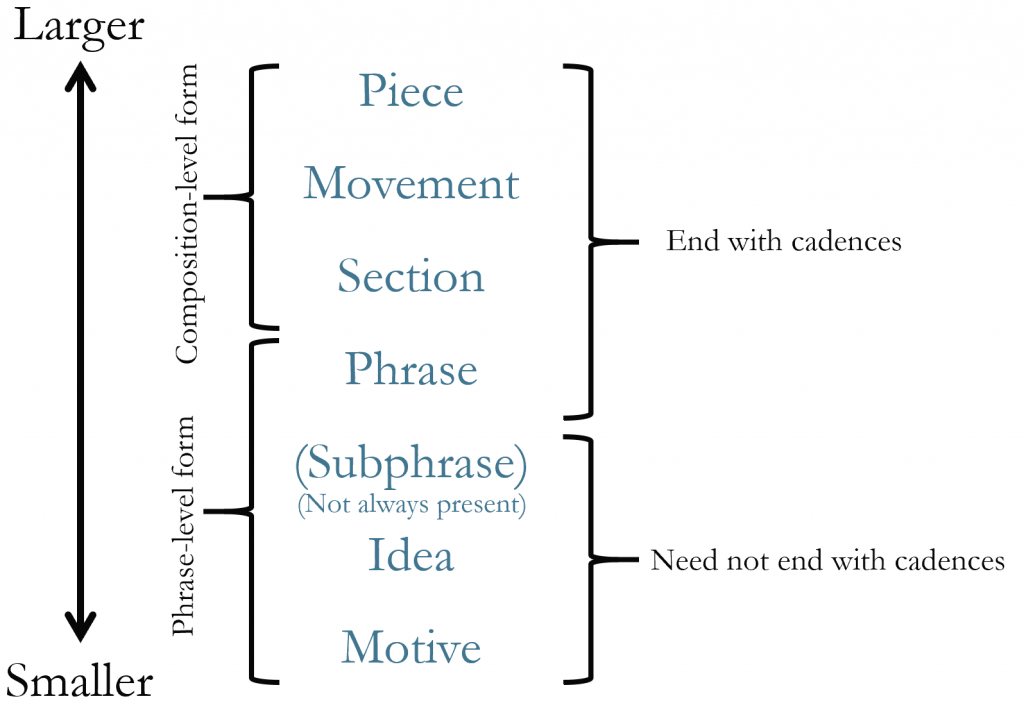 A is like a little snippet of a melody. It’s a regularly recurring unit of music that’s typically smaller than an (ideas are discussed more below). Examples 2–4 below are videos that discuss a motive from a given work; you might select whichever video interests you most, or you might watch all three. They all contain the same basic information.

While we wouldn’t want to go so far as to say that all motives must be repeated, usually the most interesting ones to talk about are, so we tend to focus on motives that recur throughout a passage.

There are many kinds of motives (e.g. rhythmic, pitch, contour, timbre), but usually when we say the word “motive” we mean a pitch-based motive. If we want to speak about a motive that’s primarily recognizable from its rhythmic design, for example, we would specify “rhythmic motive.”

Motives tend to change across a work. Some common transformations are:

This Practice It! will guide you through a motivic analysis of the opening of John Williams’s “Duel of the Fates.” To begin, listen to the opening (0:15–0:26), then start the quiz.

The Idea Level, The Phrase, and Segmentation Analysis

A is a relatively complete thought that exhibits trajectory toward a goal, arriving at a sense of closure. While phrases are examined in more detail in the following chapter, here are two important points:

“Relatively complete” means that the phrase has a sense of beginning, middle, and end.

In much tonal music, closure is most often signaled by a , though other ways of achieving closure will be examined in the following chapter. That phrases end with closure is particularly important because it can help us to shape the passages we perform to give them a sense of trajectory toward their goal.[1]

When we analyze a phrase, we often begin with a , which uses square brackets above the staff to identify the phrase’s component parts.

The smallest level of a segmentation analysis is called the . If needed, see Example 1 for a reminder of where the idea level fits in the hierarchy of form. Ideas are short grouping units that contain the motivic material for the work. They are often two measures long, but they may be longer or shorter. Ideas may group together to create subphrases or phrases, something that is discussed in more detail in the next chapter.

To perform a segmentation analysis, do the following:

The videos in Examples 6 and 7 both demonstrate a segmentation analysis. They contain similar explanations, so you might choose to watch whichever interests you most.

A regularly recurring unit of music that's smaller than an idea, and which is typically transformed across a work. The word "motive" usually refers to pitch material, but other kinds of motives such as rhythmic or contour also exist.

The smallest unit of music identified by a segmentation analysis. Ideas need not end with cadences, and they may combine to form subphrases or phrases. Examples include: basic idea, contrasting idea, unit, cadential idea, and fragments.

The process of dividing a passage or piece of music into its component parts. Most commonly, we show the idea level on a score using square brackets above the staff. For a discussion of the hierarchy of these "component parts" see Phrase-Level Forms 1.

Refers to the various ways in which a phrase may be constructed of subphrases, ideas, and motives. Examples of phrase-level forms include sentences, periods, repeated phrases, hybrid forms, etc.

The unit of music that need not end with a cadence and which is one level smaller than a phrase, but one level larger than an idea. Subphrases do not exist in all phrase-level forms. Periods, for example, do not contain subphrases. Sentences contain two subphrases: a presentation and a continuation.

Making the durations of a motive last longer than the original.

making the durations of a motive shorter than the original

Changing the direction of the motive (e.g. instead of going up, it goes down)

Changing the metric position of the motive relative to its original statement.

Describes when a theme, row form, or motive is played in reverse in comparison to an initial (or original) statement.