Harmonic elision occurs when a harmonic progression seems to suppress or remove an expected chord for one that is similar but functionally distinct from the chord it replaced. It often feels like the combination of two simultaneous harmonic events. This is different from chord substitution because chord substitution replaces an expected chord with something similar but it doesn’t feel like two events have been combined into one, it just seems like a single event that is different than expected. Though, some use the term chord substitution in a broader sense that would also include harmonic elision as described here. This chapter covers two types of elision, leading-tone elision and raised-root elision

A leading-tone elision occurs when a chord has a leading tone (or an applied leading tone) and that note doesn’t resolve as expected (up by minor 2nd) and instead becomes the lowered version of itself (e.g., B becomes B♭ or C♯ becomes C♮). This can happen when a dominant functioning chord resolves not to the expected triad, but to a dominant seventh with the exact same root as the expected triad as in the example below. Note that the suppressed chord can be clearly identified given what we expect to happen in this harmonic context.

Example 1. A harmonic elision where the expected chord is suppressed and replaced with a dominant seventh with the same root.

Leading-Tone Elision with a °7 chord

Example 3 contains an example of this type of leading-tone elision. Notice that Examples 1 and 3 are nearly identical except that Example 3 is using the functionally equivalent fully diminished seventh chord instead [latex]\mathrm{(vii^{o7}}[/latex] instead of [latex]\mathrm{V^6_5}).[/latex]

Example 3. A harmonic elision where the expected chord is suppressed and replaced with a fully diminished seventh chord that has an equivalent function to the dominant seventh in Example 1.

The voice leading doesn’t change much when dealing with elision, only that the leading tone becomes the lowered version of itself instead of resolving up by minor 2nd to the root of the next chord as it normally would. See the voice-leading comparison in Example 4.

Example 4. Voice-leading comparison between a regular resolution and an elided one.

When the leading tone is in the bass

Example 5. Change of expected bass when the leading tone is in the bass and a leading-tone elision occurs.

Notation: When an elision occurs, it’s good practice write the expected Roman numeral in your analysis but then cross it out and place the symbol for the chord that actually occurred. Example 8 below shows an example of this style of notation.

The first phrase of Richard Strauss’s song “Zueignung” (example 8) includes three harmonic elisions. The first occurs on beat 4 of measure 6. It is expected that the G major chord on beat 3 will be followed by a C major chord, but instead, the C major chord has been suppressed, and in its place a chord with a C♯ is used instead. This is a raised-root elision because the expected root was C and a chord with C♯ occurred instead and the C♯ is functioning as an applied leading tone. The second harmonic elision occurs in m. 8 where a quasi [latex]\mathrm{cad.^6_4}[/latex] (it actually doesn’t have the expected 4–3 part of that chord, but it’s quite similar) never resolves to its [latex]^5_3[/latex] version. Instead, the expected root G, is suppressed and a G♯ appears in its place (as an applied leading tone to vi) making this another instance of a raised-root elision. The phrase finishes with yet another harmonic elision. Measure 10 repeats the quasi [latex]\mathrm{cad.^6_4}[/latex] chord again but this time it does resolve to a chord with C as the root, but this time the dominant’s leading tone resolves down instead, making the C chord a dominant seventh instead of the expected major triad making this chord [latex]\mathrm{V^7/IV}[/latex] instead of a root-position tonic triad. This is an example of a leading-tone elision. 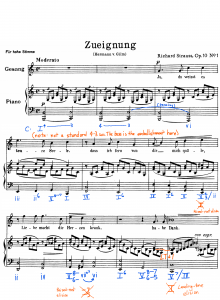