In the context of musical form, the term “binary” refers to a formal type that has two main parts. These parts are often called because each is typically repeated. Binary forms are common in 17th-, 18th-, and 19th-century repertoire, and they were used heavily in dance music.

There are two types of binary form: and . Both forms have the possibility of featuring a aspect as well (note: balanced binary is often described as its own type of binary form, but that approach is not taken here).

Binary form is typically one of the shorter forms, and because of that, it is often embedded within larger, compound forms like . 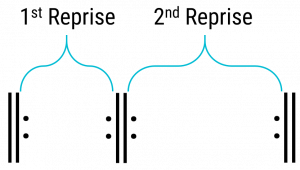 Example 1. Abstract diagram of the repeat structure in binary form.

In 17th– and 18th-century classical music, each reprise of the binary form is typically repeated, as in Example 1. The listener will hear the following structure:

In 17th– and 18th-century music, it is very common to find the repeat signs written in the score. Decorative improvisation on the repeat was expected without being specified in the score. But in the 19th century, it became more common for composers to write out the repeat instead of using repeat signs. This may be done to indicate specific decorations on the repeat, to include changes in some musical domain (like instrumentation or register), and/or to expand the music beyond the length of its first statement.

While having two—usually repeated—reprises is common to all binary forms, there are two relatively distinct sub-types that capture the form’s larger melodic organization:  and , shown in Example 2. Formal organization is represented with uppercase letters and prime symbols.

The first section of a binary form piece is represented with the letter A. In both subtypes of binary form, A is the and presents the main melodic material (see Formal Sections in General).

B sections (the ) vary depending on the type of binary form (Example 2). Both forms can also feature a aspect (represented with an x in parentheses), as discussed further below. 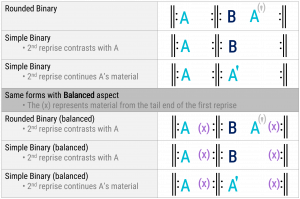 In rounded binary, the beginning of A returns in the somewhere in the middle of the second reprise. It is not necessary for all of A to return (though often it does)—only the beginning. While the returning material may be exactly the same, it’s also common to see slight variations, like change of octave, accompanimental pattern, and/or melodic embellishments. If there is variation, you should still be able to experience the feeling of return when the A material comes back. If unsure, you can expect the harmonic analysis to remain essentially the same, the chord changes will likely be in the same metric locations, and the scale degrees of the melody will also be in the same order and in the same metric locations; just make sure to account for the possibility of slight variation in the domains listed above.

In rounded binary form, the second reprise starts with a B section. Typically, the B section is less stable than the A section and may involve common destabilizing features like , chromaticism, and dominant . In some binary forms, however, the B section is quite stable but simply presents different thematic material than A (see, for example, the B section of the Trio from the third movement of Mozart’s String Quartet in G major, K. 80).

The Menuetto from the third movement of Mozart’s Symphony no. 25 in G minor (Example 4) is a clear instance of a rounded binary form typical of the mid- to late 18th century. After a relatively stable thematic statement during the first reprise (mm. 1–12, A), the second reprise (mm. 13–36) can easily be divided into two distinct parts, B (mm. 13–20) and A′ (mm. 21–36). The impression of a division is the result of the return of A material at m. 21 and the half cadence that precedes it at m. 20.

In the 18th century, half cadences before the return of A in rounded binary forms are quite common. In the 19th century, however, composers may also elide or otherwise obscure this boundary, as Chopin does between mm. 16 and 17 in the rounded binary form found in mm. 1–24 of his polonaise in A major, Op. 40, no. 1. 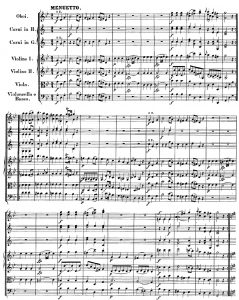 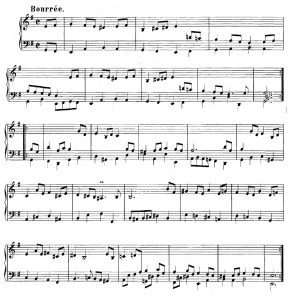 Example 7. Abstract diagrams of each binary form with balanced aspect.

In longer simple binary forms, the balancing material can be quite substantial. In Domenico Scarlatti’s Sonata in A major, K. 322 (Example 8), the material that returns is nearly 24 measures long—over half the length of the first reprise—and is easily recognizable by ear. In the Scarlatti work, (x) starts in the middle of m. 21 and ends at the end of the first reprise, m. 44. That material returns in the second reprise in the middle of m. 59 and continues to the end of the work, with a few new melodic decorations along the way (compare m. 26 and m. 63, for example). Importantly, note that (x) in the second reprise has been transposed back to the home key. In other words, when it was stated initially in the first reprise, (x) was in the key of E minor/E major, so it needed to be transposed back to the key of A in order for the work to start and end in the same key.

Each part of the binary form commonly ends with standard cadence types (, , or ), especially in 18th-century classical music. But stylistic preferences of the 19th century alter cadential expectations for the first part in particular: composers sometimes opted for lower levels of closure, ending with tonic- progressions instead of standard cadence types (examples:  Schumann, Papillon, 1 [m. 8] & 7 [m. 8], Kinderszenen, no. 9 [m. 8]).

If the first reprise of a binary form is open, it may contain a .

Regardless of the harmonic situation at the end of the first reprise, you should expect the second reprise to end with an authentic cadence in the original key. There may be additional cadences before the end, but the PAC at the end of the second reprise is essentially an obligatory convention in common-practice-period tonal music. If a piece starts and ends in different keys, it exhibits rather than monotonality.

As with most aspects of form, binary form moves between relative and relative instability throughout the form which serves to give the work a linear drive due to the expectation that a work will start stable, become unstable, and ultimately end with a sense of relative stability. In binary form, you can expect that:

A section of a work that bears repeat signs, like either of the parts of a binary form.

A type of binary form where the material at the start of reprise 1 returns somewhere near the middle of reprise 2. Both appearances of that repeated music are expected to be in the home key.

A type of binary form that does not contain the thematic return of a rounded binary. Instead, the second reprise continues with A material without ever having departed from it (thus there is no “return”), or it contains relatively new material throughout.

A type of ternary form where at least one of the form's parts (A, B, or the second A section) is composed of its own complete form (typically a binary form). The term "compound" can also be used to clarify that a single section contains a complete form. Compare with simple ternary form.

A section that presents the work's primary musical ideas. Usually, the main section is the first core section of the work. Examples include primary themes, refrains, expositions, choruses, or strophes.

A core section that provides contrast with the main section. May be stable or unstable.

A term used to describe a piece's overall tonic. If a movement is in the key of A major, then the home key is A major. The term is used to distinguish itself from local keys.

A pattern that is repeated and transposed by some consistent interval. A sequence may occur in the melody, the harmony, or both.

Pedal tones are often found in the bass. They consist of a series of static notes over top of which chord changes occur that do not include the bass.

A V–I cadence that ends with do (1̂) in the melody. Both harmonies must be in root position.

A V–I cadence in which V, I, or both harmonies are inverted, and/or do (1̂) is not in the soprano over the tonic triad. Additionally, IACs are often used to evade a cadence.

A kind of inconclusive cadence that occurs when a phrase ends on V. Occasionally, particularly in Romantic music, the final chord of a half cadence will be V⁷.

When a given harmony’s influence lasts longer than a single chord. Usually this is accomplished by alternating the prolonged chord with other, less important chords.

A phrase or module is harmonically open when it ends on a harmony other than tonic.

A phrase or module is harmonically closed when it ends with tonic harmony (I in root position).

A piece that has one overarching tonic, that is, it starts and ends in the same key and contains a single tonic that gives the impression of being the primary key of the work.

A piece that starts and ends with different tonics. Compare with monotonality, which is the default harmonic plan in most tonal works from the 17th, 18th, and 19th centuries.

A perceived quality created in music through tonic expansions, regular hypermeter, absence of modulations, diatonic melodies, and diatonic harmonies, among other things.