In this chapter we will explore other elements of music besides pitch (discussed in previous chapters) and duration (discussed in following chapters). These elements include dynamics, articulations, tempi, stylistic periods, and structural markers.

indicate the loudness of music. In Western musical notation, we often use italicized Italian words, which can be abbreviated, to describe dynamics. The dynamic marking means loud, while means quiet. In sheet music, these words are written either above or below the staff.

Dynamics are often abbreviated in Western musical notation, as shown below.

Some composers add even more “-issimo“s, but this is rare. However, you might one day spot a pppppp or an ffffff in music that you play or sing!

There are three other Italian words that are commonly used to indicate a change in dynamic level. (cresc.) means to get louder, while (decresc.) and (dim.) both mean to get quieter. Crescendos and decrescendos are indicated two different ways: either by writing out the abbreviation cresc. or decresc., possibly followed by dots, or by drawing . The term “hairpin” refers to the following symbols, which roughly approximate the shape of a bobby pin (or “hairpin”), as seen in Example 2.

The term refers to the connection or separation between notes and to the accent level at the beginning of a note (its ). Several articulations are demonstrated in Examples 3–7. Percussion instruments, plucked strings, bowed strings, winds, brass, and voices all have different methods of carrying out particular attacks and articulations. You will want to consult with a private teacher or ensemble director for help with applying different articulations to your instrument or voice.

Example 3: means to play or sing smoothly or connected. This articulation is indicated by a curved marking.

Example 4: Another way to indicate smooth, connected playing is with markings, which look like a small line above or below notes.

Example 5:  means to play or sing notes more separated, leaving space between notes. This articulation is usually indicated by a dot placed above or below notes.

Example 6: An (a sideways V) means to play or sing a note with extra stress or emphasis.

Example 7: A marking (an upside-down V) means to play or sing a note with a more forceful accent.

Accented notes can also be indicated by the italicized abbreviations sfz, sf, or fz (sforzando, forzando, or forzato). These accents are usually interpreted to be slightly more forceful (i.e., louder) than regular accents. These symbols work like dynamics and are placed directly above or below the note to which they apply.

(plural tempi) is the term for how fast or slow a composition is performed. Tempi are usually indicated either specifically, by a metronome marking, or less specifically, by a textual indication. A is usually indicated in beats per minute (BPM). A work that is marked ♩ = 60 would contain 60 quarter notes in one minute (one quarter note per second). With a free metronome application (such as Pro Metronome) on your phone, you can easily check the tempo of a work you’re playing or singing.

Like dynamics, most tempo markings are written in Italian. They often appear at the beginning of a work, movement, or section, at the top left of the first staff or system. The most common tempi are as follows:

Example 8 depicts tempi from the slowest to the fastest:

Composers sometimes use additional Italian words, especially emotive expressions, to modify a tempo marking. Words like assai (“very” or “rather”), espressivo (“expressively”), or cantabile (“singingly”) frequently appear after tempo markings, especially in works written after the year 1800. For example, one might come across tempo markings like “allegro assai” (“very fast”), “andante cantabile” (“a moderate tempo, singingly”), or “adagio espressivo” (“slow and expressive”). Always be sure to look up the definition of any words that you do not know in your music.

Two other Italian words are commonly used to indicate changes in tempo:  (rit.) for a gradual decrease and  (accel.) for a gradual increase. Both words are generally italicized, and they are often abbreviated (rit. and accel. respectively). When these directions are meant to apply to several measures, they are often followed by dots. The dots continue as long as the direction is meant to be followed.

The following words and symbols indicate  in compositions. Structural features divide up a work or movement into smaller sections. 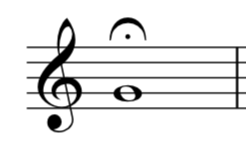 Example 9. A note in treble clef with a fermata.

Example 10. A note in bass clef with a caesura after it.

Example 11. A note in alto clef with a breath mark after it.

indicate that a section of music should be repeated (Example 12). If the repeated section ends differently each time, that is indicated with first and second endings (Example 13).

Example 13. A repeat sign with a first and second ending in treble clef.

Occasionally you may come across music that has more than two endings. Repeated sections with a third or even a fourth ending are common in some styles of music, such as Broadway musicals. These work like a first and second ending: the third ending is performed after the third time the section is repeated, the fourth ending is performed after the fourth time, and so on.

As you begin to study music theory, it will be helpful to have a basic familiarity with the ways in which music theorists and historically Western classical music. Time periods in the history of this music are flexible, but having a general framework to group musical compositions with certain stylistic similarities can be useful for musicians.

The following time periods, depicted in Example 14, are generally agreed upon by most musicologists:

The musical term for loudness.

Getting gradually louder; sometimes represented in notated scores with a hairpin symbol.

Getting gradually softer; sometimes represented in notated scores with a hairpin symbol.

Refers to both a note's length and the accent level of its attack.

The onset of a note (as opposed to the following sustain or decay).

How fast or slow a work is performed; many tempo markings are in Italian or another non-English language.

To divide time into different periods.

Musical features that pertain to section divisions and form.

A crescendo or decrescendo symbol.

A curved line placed over notes to indicate that they should be played or sung without separation.

A type of articulation marking used to indicate smooth, connected playing, indicated by small horizontal lines above or below the notes.

Played or sung with more separation, leaving space between notes.

A stress or emphasis on a note.

To play with a more forceful accent or emphasis.

An indication of tempo in beats per minute (BPM).

A gradual decrease in speed (tempo).

A gradual increase in speed (tempo).

A symbol that indicates one should hold a note longer than its written duration. Notation: 𝄐

Indicates a break and/or a cutoff.

Indicates a breath (for wind instrumentalists and vocalists) or a pause (for percussionists and string players).

Symbols (𝄆 and 𝄇) indicating that a section of music is repeated.

OPEN MUSIC THEORY by Chelsey Hamm and Mark Gotham is licensed under a Creative Commons Attribution-ShareAlike 4.0 International License, except where otherwise noted.