Overview of Formal Sections in General

Understanding a music’s form typically involves breaking it down into spans of time based on how each span is similar to other spans and/or how they contrast with one other. These spans are then classified based on the identity of their musical material and how the section “functions” in the context of the piece. The two largest categories of formal function are core sections and auxiliary sections. This particular dichotomy was introduced by Jay Summach in his dissertation “Form in Top 20 Rock Music, 1955-89” (Yale University). The diagram below summarizes the hierarchical relationship between some of the most common section types. 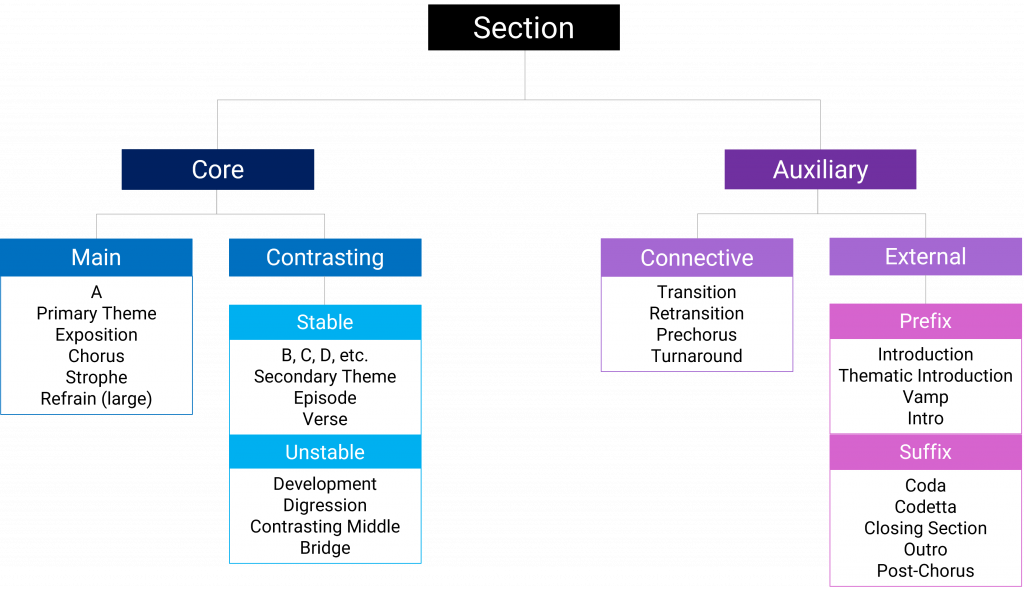 Core sections typically introduce and repeat a work’s primary musical ideas and you can think of them as the sections of music that you might sing for someone, if they asked you how the work “went.” You can also consider core sections to contain the work’s “themes” though usage of that word tends to range from very broad to incredibly specific. Core sections also tend to repeat which is another reason they will often make a stronger impression on your memory.

Main sections are typically the first section that presents primary musical ideas, they are usually repeated later in the work, and are characterized by a relative sense of stability. They are the sections whose musical material most would primarily associate with a work and are typically a key component of the work’s identity. The terms for main sections change depending upon the conventions of the genre and form (if it is a form with a name). When thinking about form in general, the main section should be called A, but within a known form it may go by many names including (but not limited to:

Contrasting sections tend to have a broader range of affects and levels of stability. In some cases, they could be indistinguishable from sounding like a main section but they simply were not the first core section and in other cases they may be the most unstable section of the work. Unstable sections may also share many musical features with connective auxiliary sections (defined below) but the difference is one of being considered a core section or not. Relatively speaking, contrasting sections sound like a primary place in the work, whereas connective sections sound like a place between two core sections. In some cases this line may very well may be blurry but the conventions of a named form can be called upon or employing multiple formal descriptors (e.g., becomes) can aid in providing a classification that feels accurate and not forced.

Formal stability is the sense of tension vs. calmness in a portion of music. A relative sense of stability in a work is a common means of delineating form, and is an important dramatic concern for creating momentum and engaging a listener’s expectations about what might happen, given their familiarity with how other pieces in a given genre/style behave.

Common features for each might include some combination of the following features:

A stable contrasting section would typically sound normal if it started the work instead of the main section, its ordering is the only reason it is considered contrasting. It simply contrasts with the work’s main section. On the other hand, the instability of an unstable contrasting section would likely sound unusual at the start of a work simply because it is statistically common for works to start with a stable section.

In addition to the sections of a work (i.e., sections called A, B, primary theme, secondary theme, refrain, episode, and contrasting middle/development/digression), other sections may introduce, follow, or come between these core sections. These sections are called auxiliary sections and there are two general categories, external and connective.

A prefix (William Rothstein, 1989) refers to music that comes before the generic start of a phrase or piece and tends to express a formal sense of “before the beginning.” A prefix can be described as either small or large depending on whether or not it contains a complete . Large prefixes contain at least one phrase and small prefixes don’t have complete phrases and are typically far less noticeable. Small prefixes are often nothing more than the upcoming section’s accompaniment which precedes the actual start of the phrase’s melody and they may precede any phrase in a work. The most common type of large prefix is called an introduction. Introductions are often in a slower tempo than the rest of the work and often contain their own thematic material. Small prefixes can be found in works of most genres and eras, but large prefixes are less ubiquitous and tend show up more often in particular genres, like the opening of a symphony. Though, other genres like the piano sonata (Beethoven’s “Das Lebewohl” op. 81a), string quartet (Mozart’s “Dissonance” quartet), and dance forms like ragtime (Joplin, “The Entertainer”) can contain them as well.

A suffix (Rothstein, 1989) refers to music that comes after the close of a phrase or piece and tends to express a formal sense of “after the end.” The distinction between large and small again concerns whether or not it contains a complete . Small suffixes can be found after the close of any phrase but the affect is quite different depending on the type of cadence they follow. After an authentic cadence they typically project a sense of stability and closure but after half cadences they tend to prepare for the entrance of the upcoming section and therefore project a sense of instability. Though possible after any phrase, large suffixes typically appear in two specific locations: (1) at the very end of a piece in the form of a , and (2) as the closing section of a sonata form’s exposition and recapitulation. In most cases, suffixes contain musical material that is different than the phrase it follows though that material may be derived from an earlier phrase.

Generally, a section of music that functions to connect two sections. Transitions usually help to lead away from the piece’s main section toward a contrasting section. In particular, a transition comes between two sections where the upcoming section is not the initiation of a large-scale return (i.e., between A and B, not between B and A). Often a modulation is introduced to help prepare a section in a new key, though a modulation is not required. A transition also plays a role in the balance of stability and instability in a work. Core sections of a work are very often stable thematic statements (relatively) but transitions typically introduce instability (and a gain in energy) which will likely be countered by the stability of the section that follows.

Like suffixes and prefixes, transitions and retransitions come in “large” and “small” varieties. A transition can be described as either small or large depending on whether or not it contains a complete . Large transitions contain at least one phrase and small transitions don’t have complete phrases and are typically far less noticeable.

Near their end, transitions (and retransitions) often drive toward attaining the dominant chord of the upcoming key. Often, a suffix will begin once the dominant has been attained in a situation sometimes called standing on the dominant (William Caplin) and dominant lock (James Hepokoski and Warren Darcy).

A transition may have a clear stopping point before the next section starts, or there may be a single melodic line that fills the space between it and the upcoming section, or the transition my end at the onset of the new section with an . In more vague cases—the end of the transition and the start of the new section may be hard to pinpoint but still clear that it must have happened during a particular span of time.

Transitions are commonly found in sonata forms between the primary and secondary themes and in rondo forms when the A section (a.k.a. refrain) is being departed from to prepare for contrasting sections (a.k.a. episodes). Small transitions are often found in ternary forms to connect the A and B sections.

A retransition is very similar to a transition, but its location and function are different. Retransitions come between two sections where the upcoming section is the initiation of a large-scale return (i.e., between B and A, not between A and B). In most cases, retransitions help prepare the return of the piece’s main section. In a ternary form this would be the A section, in a sonata form this would be the restatement of the primary theme at the onset of the recapitulation, and in a rondo this would be the return of A section (a.k.a. the refrain). A retransition often drives toward attaining the dominant chord of the home key and will often prolong the dominant once attained, usually in the form of a suffix. Retransitions may have a clear half-cadential ending (possibly followed by a suffix), or they may have an ending that coincides with the initiation of the following section.

A type of suffix (external auxiliary section). Codas are usually of the large variety (a phrase or longer), and they occur at the end of a work (or end of a movement within a multi-movement work) after the PAC that ends the piece proper. The word coda is Italian for “tail” because they are found at the tail end of a work. Sometimes composers communicate the location of the coda by writing the word in the score but this is not necessary to identify a section as a coda. Like all suffixes, codas are considered an expansion technique and therefore the are not essentially to the structural content of the work and it is often said that the work would still make complete syntactic sense if it were removed entirely.

An elision is the overlapping of two phrases that functions as the ending of one phrase and the simultaneous beginning of the next.