In this section of open music theory we’ll focus on how Western classical music composers use harmony in a . Harmony is one important component (among others) of creating a phrase’s sense of forward motion toward a goal. As we study harmony, it’s important to keep two larger related concepts in mind: 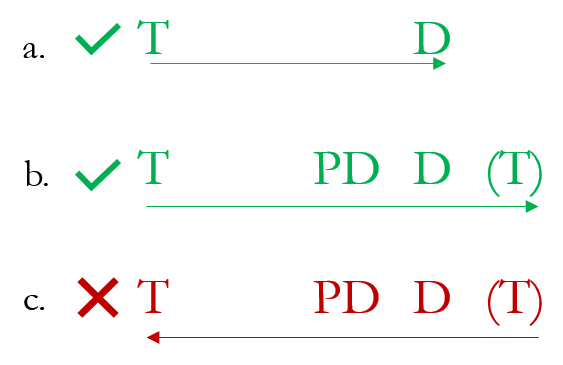 Example 1. The phrase model: (a) the minimum functions needed to create forward motion, (b) more common functional layout for a phrase (the final tonic is optional), (c) harmonic functions do not progress right to left.

One way to create a sense of closure at the end of a is through , which are melodic and harmonic patterns that create goals, kind of like punctuation marks in literary sentences. They’re important not only because they can help you determine phrase endings, but also because they help establish a key. As a result, we typically advocate listening for potential cadence points as a first step in analysis.

An occurs when the harmonic progression V–I (or V–i in minor) marks the end of a phrase. There are two kinds of authentic cadence:

Ferne by openmusictheory. A (CC0) transcription of the full song is available here.

Half cadences (they sound inconclusive!)

A (HC) occurs when a phrase ends on V (Example 2, m. 4). A variety of chords can precede V, so we often refer to the harmonic progression that marks HCs as “x-V,” where the “x” refers to a variety of chords we’ll discuss in later chapters. For now, we’ll restrict our vocabulary to only I and V chords (or i and V in minor) so we can learn some basic techniques of voice-leading.

Cadential strength and the IAC

Since there are many ways to compose an IAC (a composer can theoretically use various combinations of inverted chords and a host of scale degrees in the melody), a composer can choose to make an IAC more or less strong.

An additional complication is that composers often avoid creating a PAC using progressions that fit the description of an IAC, but which don’t mark the end of a phrase. In Example 5, m. 8 contains a potential IAC, but when m. 9 begins to repeat the material from m. 5 (compare the bass voice in m. 9 with the soprano in m. 5) it sounds like the passage is trying the run up to the cadence again to achieve something stronger than the potential IAC at m. 8. We indicate that the cadence in m. 8 is subverted by crossing the label out on the score. With so many possibilities, how can we determine what counts as a true IAC? The next section (“hearing cadences”) offers some help.

While there is certainly a degree of intuition involved with hearing cadences, it’s also a skill that can be honed over time. We recommend doing the following when you listen for cadences:

EXAMPLE 7. Writing a PAC in a major key.

EXAMPLE 8. Writing a PAC in a minor key.

EXAMPLE 9. Writing an IAC in a major key.

EXAMPLE 10. Writing an IAC in a minor key.

Writing Half Cadences (using I and V only)

Example 11. Writing a HC in a major key.

EXAMPLE 12. Writing a HC in a minor key.

Refers to three cateogories of chords: tonic, predominant, and dominant. A chord's membership within a category indicates something about how that chord typically behaves in tonal harmonic progressions in Western classical music. For example, tonic function chords are stable and tend to represent points of resolution or repose.

Indicates the typical order and flow of harmonic functions in a phrase: T-PD-D-(T).

A kind of inconclusive cadence that occurs when a phrase ends on V. Occasionally, particularly in Romantic music, the final chord of a half cadence will be V7.

A category of chords that sound stable, providing a sense of home or center. In Western classical music, the only chord that belongs to this cateogory is I (in minor: i).

A category of chords that provides a sense of urgency to resolve toward the tonic chord. This cateogry of chords includes V and viio (in minor: V and viio).

A V-I cadence in which both harmonies are in root position and in which Do (scale-degree 1) is in the soprano over the tonic chord.

Additionally, IACs are often used to evade a cadence. Please see the chapter on cadences for a more thorough discussion.

One of three formal functions (with the other two being middle and ending). Beginnings are often signaled by: establishment of a new melody, or repetition of the beginning of a previously heard melody, emphasis on tonic harmony (especially root position), a melody that opens up musical space by ascending, statement of a motive that is developed through the remainder of the phrase.

Occurs when a potential cadence point is declined by the material that follows it. A common strategy is for a composer to write music that proposes a cadence, but then to "back up" in the phrase and try the cadence again. See also "One-more-time" technique in the chapter on phrase expansion.